An Aeroplane work on

An Aeroplane work on

Wings of an airplane: The wings of the airplane are having tapering. In an airplane, the top of the wing is somewhat curved while the bottom of the wing is flat. Due to this specific shape of wings when the airplane runs, air passes at a higher speed over it as compared to its lower surface. This difference of airspeeds above and below the wings, in accordance with Bernoulli’s principle, creates a pressure difference, due to which an upward force called ‘dynamic lift’ (= pressure difference area of the wing) acts on the plane. If this force becomes greater than the weight of the plane, the plane will rise up. 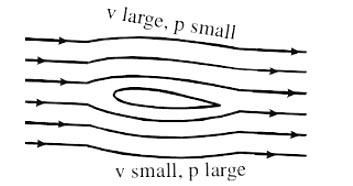