Both low and high excitation

In a synchronous motor, the armature current has large values for both low and high excitation.

Due to this, ER increases in magnitude. This means for constant Synchronous Impedance (Zs), the current drawn by the motor increases. But ER, the phase shift in such a way that, phasor Ia, also shifts (as ER ∧ Ia = θ) to keep the Power component of Ia i.e Ia cosφ components constant. So in under excited conditions, the current drawn by the motor increases. The power factor cosφ decreases and becomes more and more lagging in nature. 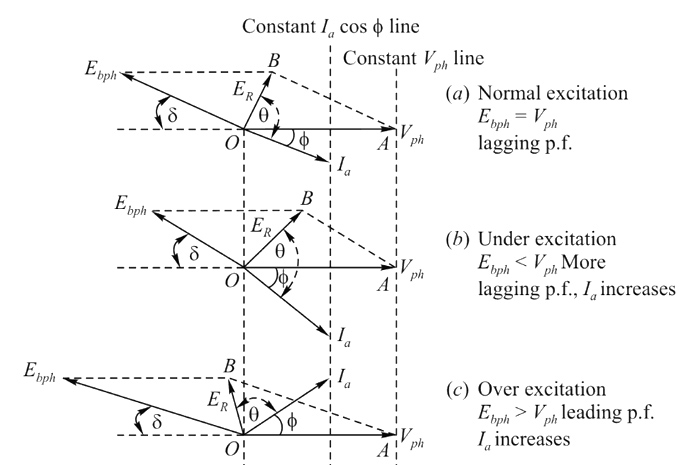 Over excitation condition: The excitation to the field winding for which the induced emf becomes greater than the applied voltage (Eb > V) is called overexcitation.

Due to the increased magnitude of Eb, ER also increases in magnitude. But the phase of ER also changes. Now (as ER ∧ Ia = θ) is constant, hence Ia also changes its phase, So φ changes. The Ia increases to keep Ia cosφ constant. The phase of ER changes so that Ia becomes leading with respect to Vph in over-excited conditions. So power factor of the motor becomes leading in nature. So overexcited synchronous motor works on leading power factor. So power factor decreases as over excitation increases but it becomes more and more leading in nature.

Two important points stand out clearly from the above discussion :

(i) The magnitude of armature current varies with excitation. The current has a large value both for low and high values of excitation (though it is lagging for low excitation and leading for higher excitation). In between, it has a minimum value corresponding to a certain excitation.

(ii) For the same input, armature current varies over a wide range and so causes the power factor also to vary accordingly. When over-excited, motor runs with leading p.f. and with lagging p.f. when under-excited. In between, the p.f. is unity. 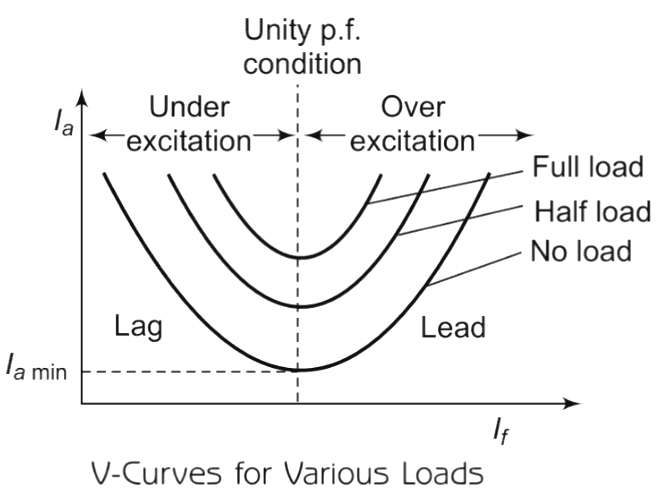