1. Which of the following factor is not considered while selecting a kind of pattern?

The selection of pattern materials depends on the following factors.

(i) Number of castings to be produced

(iii) Method of casting to be used

(iv) Dimensional accuracy of the component

(v) Design and shape of the component.

Types of moulding method are the function of pattern maker that must keep while making a pattern.

2. The common type of pattern used in casting is/are

Types of pattern According to the design of casting, the complexity of shape, moulding process and accuracy, the pattern types are as follows:

3. Which type of pattern should be used for making the stuffing box of the steam engine?

4. The given figure below resemble which of the following pattern? 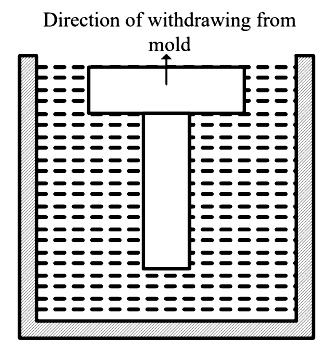 Solid pattern:-It is the simplest form of pattern which is exactly like the desired casting.  When using this type of patterns, moulding operations like cutting runners and risers has to be manually cut separately. So mould process is inconvenient and time-consuming. So such patterns are used for producing few large castings.

5. The following figure represents which pattern? 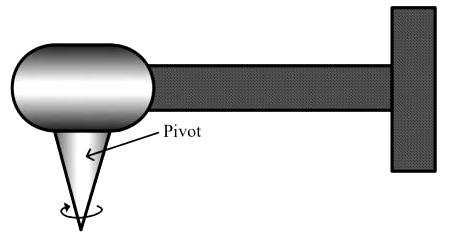 To create the mould, it is rotated about the post in the same way as in sweep pattern. But it is not revolved continuously about the post to prepare the mould. Rather, it prepares the mould by parts. When one portion of the mould is completed, the pattern is lifted up and moved to the next portion to make the next segment of the mould. This process is continued until the entire mould is completed. Big gears and wheel rims etc. are produced with the help of segmental patterns.

6. For complicated casting process which pattern is commonly used

Patterns of intricate (complicated shape) castings cannot be made in one piece because of the inherent difficulties associated with the moulding operations. Such patterns are then made as split or two-piece patterns.

The two-piece pattern is made of two halves separated at the parting line so that one part will produce the lower half of the mould (drag) and the other, the upper half (cope). The two parts which may or may not be the same size are held in the proper relative positions by means of dowel pins. These dowel pins match with the precisely made holes in the drag half of the pattern.

Taps and water stop-cocks are produced with the help of a split pattern.

7. Which of the following option is true for the given statements?

Statement 2: Loose piece patterns are used in this situation

8. Which of the following pattern is used to make a piston ring and IC engine?

9. Another form of split type pattern is

10.  In a two-piece pattern moulding arrangement, what keeps the alignment between the two parts of the pattern?

A pattern having, two pieces to form a mould cavity is known as a two-piece pattern or split pattern or cope and drag pattern.

The upper and lower parts of the two-piece pattern are accommodated with the help of dowel pins in the cope and drag portion of the mould. Dowel pins are used for keeping the alignment between the two pieces at the parting line.

11. When an operator required bulk casting of the circular section then which pattern he will generally prefer?

12. The following figure represents which pattern?

When a few and large-sized castings are required, it is not advisable to use a large solid pattern of that size, as it will require a lot of wood and time to make a full pattern. In such cases, a skeleton pattern in the hollow form, consisting of a wooden frame and strips.

13.  Which of the following pattern operation is cheapest?

A solid pattern is the simplest and cheapest of all patterns as is made in a single piece. Depending upon the shape and size, it can be moulded in one or two boxes. It is used to a limited extent in production only. Since its moulding involves a large number of manual operations like cutting gates, runners and risers, it is used for casting few components only.

14. Which pattern operation is used for manufacturing wheel rims?

Segmental patterns resemble the shape of a segment and are used for circular work like rings, gears, wheels, rims, pulleys, etc. These are also known as part patterns, as only a part of the pattern is used to form a complete mould.

15. Which of the following is not a pattern but a device?

Follow board is not a pattern but is a device used for various purposes. It is used for supporting a pattern that is very thin and fragile which may break or collapse under pressure when the sand above is rammed. With the following board support under the weak pattern, the drag is rammed and the following board is withdrawn. Follow board also forms the parting line of the mould or casting.