The coasting retardation on city service is approximately

The coasting retardation on city service is approximately

During the Coasting period, the Power to the motors is cut off at the point so that the train runs under its momentum, the speed gradually falling due to friction, windage, etc. During this period, retardation remains practically constant. Coasting is desirable because it utilizes some of the kinetic energy of the train which would, otherwise, be wasted during braking. Hence, it helps to reduce the energy consumption of the train.

The speed-time curve of urban or city service is almost similar to suburban service and is shown in Fig.

In this service also, there is no free-running period. The distance between the two stops is less than 1 km. Hence, relatively short coasting and a longer braking period is required. The relative values of acceleration and retardation are high to achieve a moderately high average between the stops. Here, the small coasting period is included to save energy consumption. The acceleration for the urban service lies between 1.6 and 4 kmph. The coasting retardation is about 0.15 kmph and the braking retardation is lying between 3 and 5 kmph. 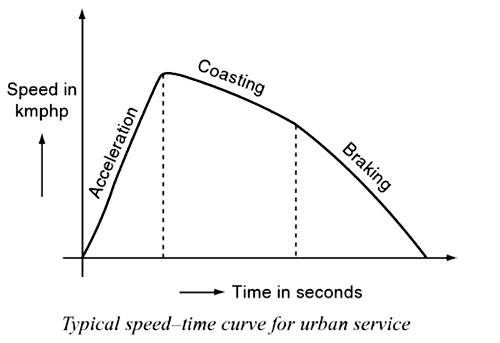