The most commonly used method of speed control of a D.C motor is by varying the

The most commonly used method of speed control of a D.C motor is by varying the

Field control is the most common method and forms one of the outstanding advantages of shunt motors. The method is, also applicable to compound motors. Adjustment of field current and hence the flux and speed by adjustment of the shunt field circuit resistance or with a solid-state control when the field is separately excited is accomplished simply, inexpensively, and without much change in motor losses.

The speed of DC Motor is inversely proportional to the field current and flux.

By decreasing the flux the speed can be increased and vice versa. Hence this method is also called as a flux control method.

The merits of this method are:

The demerits of field control as a method of speed control are: 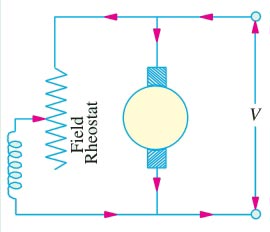 In a series motor, the variation of flux can be brought about in any one of the following ways