Contactors and relays are misinterpreted most of the time as they both are closely related terms leading to confusion. A relay is basically just an electrically operated switch. Some are tiny and handle only small amounts of current at low voltages, whereas other types, called contactors, are huge (the size of a small refrigerator) and can safely deal with hundreds of amperes and thousands of volts. But regardless of size and power capacity, all relays and their close cousins the contactors use the same basic principle of operation.

Principle of Operation of Relay and Contactor

Relays and contactors are electromechanical switches. They operate on the solenoid principle. A coil of wire is connected to an electric current, The magnetic field developed by the current is concentrated in an iron pole piece. The electromagnet attracts a metal armature. Contacts are connected to the metal armature. When the coil is energized, the contacts open or close. There are two basic methods of constructing a relay or contactor. The clapper type uses one movable contact to make the connection with stationary contact. The bridge type uses a movable contact to make the connection between two stationary contacts.

The electrical control relay is an electromechanical device that contains auxiliary contacts. Auxiliary contacts are small and are intended to be used for control applications. As a general rule, they are not intended to control large amounts of current. Current ratings for most relays can vary from 1 to 10 amperes depending on the manufacturer and type of relay. The major parts of a relay are shown in the simplified diagram of Figure. Essentially, the relay consists of a:

⇒ Coil, designed to operate at a specific voltage, and if a.c. a specific frequency.

⇒ Magnetic circuit, part of which is a moving plunger or armature.

⇒ The mechanical linkage between the plunger/armature and the contacts. 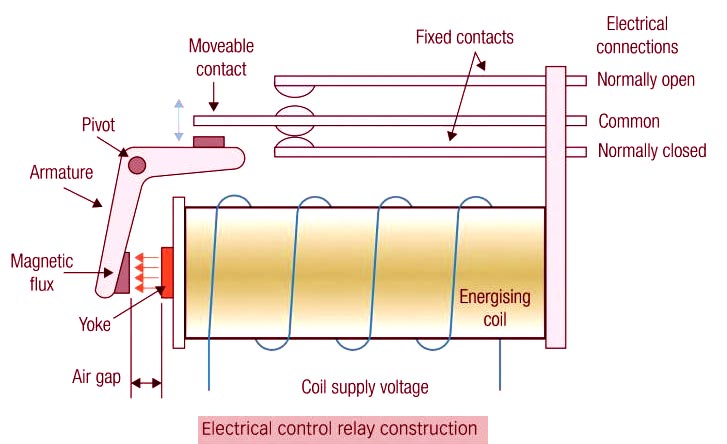 ⇒ De-energized: No voltage is applied to the relay coil.

⇒ Energized: Rated voltage is applied to the relay coil.

The contactor is a larger version of the relay. Devices switching more than 15 amperes or in circuits rated more than a few kilowatts are usually called contactors. A contactor is a mechanical switching device that is capable of making, carrying, and breaking electric current under normal circuit conditions including operating overload conditions. The contractor has the same basic construction as a relay. It is an electromechanical device that has an operating coil, a magnetic circuit, and one or more sets of contacts. 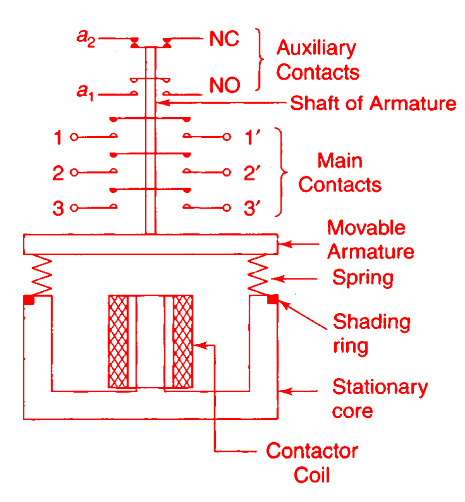 Contactor coil may have voltage rating like 24V, 230 V, 415 V. The main contacts have a rating in terms of their current carrying capacity. Auxiliary contacts are normally rated for low current, say 2A to 6A.  When the contactor coil is energized, the armature gets attracted towards the stationary core against the spring pressure.

All its NO contacts are close and all its NC contacts open. When the coil is de-energized, the armature returns to its original position due to spring pressure. While specifying a contactor, we have to write the coil voltage rating, the current carrying capacity of the main contacts, and the combination of auxiliary contacts. A typical specification will be like this:

Specifications of a Contactor:

Main contacts: No. of contacts = 3

Figure shows an exploded view of a contactor. The contacts may be NO, NC, or a combination of both. The major difference between a relay and a contactor is the current rating of the contacts. Relays have contacts that have low current-carrying capacities, whereas contractors have contacts that are capable of switching much higher currents. The important design features of contactors are listed below.

Both RELAY and CONTACTOR can work on AC or DC power sources. Both AC and DC relay or contactor work on the same principle as that of electromagnetic induction, but the construction is somewhat differentiated and also depends on the application for which these relays are selected. DC relay or contactor generally contains solid core materials and is employed with a freewheeling diode to de-energize the coil, whereas those intended for use with alternating current.

Since the contactors have heavy-duty contacts for controlling larger loads. These contacts are normally open (NO) and controlled by a magnetic coil. When the coil is energized, the contacts close. Contacts are used to open or close a circuit between the main power supply and the load and are rated according to the maximum amperage flow through the contacts for a specific voltage. A two-pole contactor has two separate contacts and is used to control 240-volt single-phase circuits (for residential air conditioning). A three-pole contactor has three sets of contacts and is used to control three-phase loads (for commercial and industrial).

Since contactors are used for high power applications, they often contain additional safety features such as spring-loaded contacts to ensure the circuit is broken when de-energized.

Latching: This means that the contactor switch is not spring-loaded, and it stays in whatever position it is placed into until the polarity is reversed to the coil, which returns the contactor switch to its original position. This is comparable to a standard home light switch—it stays on until you turn it off.

Non-latching: This is the “normal” type of contactor that we use for failsafe switches. The relay contactor switch is spring-loaded and returns to the preset position unless power is applied to the coil. This is comparable to a momentary button switch—it stays on only while you press the button; otherwise, it springs back to the off position.

Since relays are typically for lower power, spring-loaded contacts are much less common.

The contactor is a large relay. Contactors control high-energy circuits involved with lighting, heating elements, magnetic brakes, and overload protection, motors, and machinery. They contain mechanisms to break the contact rapidly following the de-energization of the electromagnet. Similarly, the movement of the plunger in the relay is also rapid.

The purpose of the rapid disconnection is to break the arc that establishes between the contacts during separation. This arc is responsible for the arc flash and arc blast that occur in electrical equipment. Note that these arcs can develop when the contactor opens under load. This is similar in concept to the arc created during welding during the controlled separation of the electrode from the base metal. Some units contain arc-entrapment devices to minimize the impact of this situation.

Since relays are designed for light load application therefore arcing is less of a concern, and arc suppression is much less common on relays.

Motor starters/Line starters are contactors with the addition of an overload relay. 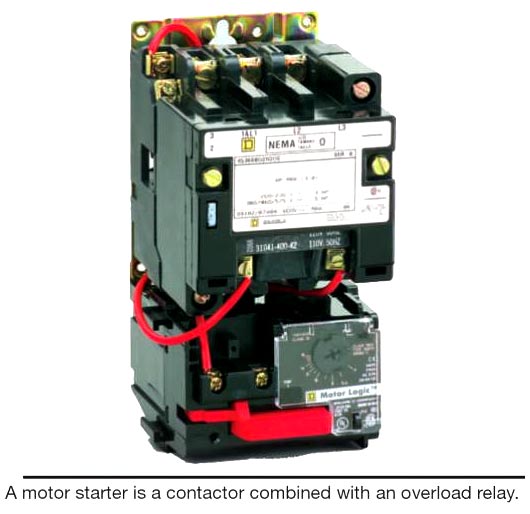 Line starters are often used to operate and protect three-phase motors. Overloads protect the motor against excess amperage and are more accurate than fuses. Overload protectors are normally connected to the bottom of the contactor and sized to the amperage of the motor. One overload is required for a single-phase power supply to the motor. For a three-phase line starter, there must be at least two overloads. Supply voltage must flow through heavy-duty contacts and then through the overload heater before traveling to the motor.

Overloads are much less common on relays.

The correct selection of a control relay for a specific application is dependent upon several factors. These are

⇒ The current rating of the relay contacts must be equal to or greater than the full-load current of the device to be switched. Additionally, the type of load (resistive, inductive, or capacitive) to be switched must be taken into account. This is known as the ‘utilization category of the relay.

⇒ The physical site of the relay. If the space available for the installation of the control circuit is limited, a relay of compact size must be selected.

⇒ The type of mounting for the relay may have to be considered. Mounting styles include surface mounting, plug-in base, and DIN rail mounting.

⇒ The voltage and frequency rating of the contactor coil must be correct; for example, 400 V, 50 Hz

⇒ The number of poles, the current carrying capacity and voltage rating of the power contacts must be equal to or above the full-load current of the load

⇒ The utilization category of the contactor must be suitable for the application (also called the category of duty).

⇒ The number, type, and current rating of the auxiliary contacts must be appropriate for the application.

Relays are useful for routing signals, switching current, or as a form of logic for some applications. While is it possible to use a solid-state component to do switching and routing chores, the relay offers the advantage of low closed-circuit resistance, immunity to reverse current flow from inductive loads, and the ability to act as an isolated control transition between low- and high-voltage circuits.

⇒ Open circuit (break) or high resistance in the relay coil wiring or connections resulting in little or zero current flow through the coil. This prevents the relay from energizing. This failure causes electrical devices supplied with electricity through the normally open contacts of a relay not to operate.

⇒ Relay contacts are burned or otherwise damaged, resulting in a high level of series resistance with the load device when the contacts are closed. This can cause low or zero current flow through the closed relay contacts. This failure also causes electrical devices that are supplied current through the normally open contacts of a relay not to operate or to operate erratically.

⇒ Aging causes the coils inside the contactor to crack which causes the insulation to break.

⇒ Chemicals and vapors in the surrounding environment cause damage to the contactor coil. At present, testing of these contactors is done manually.

⇒ The electrodynamic forces during a short circuit can mechanically damage the contactor.

⇒ Overvoltage causes a high current to flow in the coil damaging it.