In a CRO which of the following is not a part of the electron gun?

In a CRO which of the following is not a part of the electron gun?

CRO is an electronic instrument used for measuring voltage, time, frequency, phase shifts and for observing the shape of the input waveform. It is also known as a fast x-y plotter that displays an input signal versus another signal or versus time. The heart of CRO is CRT, i.e. cathode ray tube as shown in Fig.

Construction and operation of CRT

The cathode ray tube (CRT) can be divided into three parts, 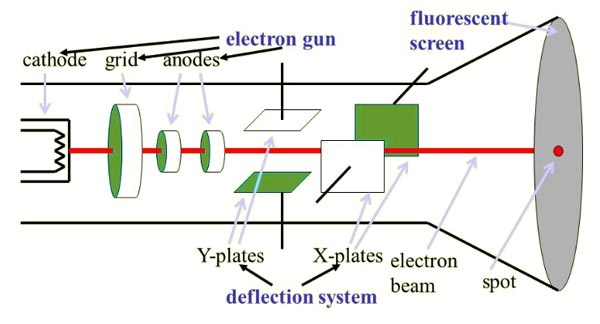 Now the focussed and accelerated electron beam is passed through the vertical and horizontal deflection plates. A voltage is applied to the horizontal plates to deflect the beam in the ‘x’ direction while the voltage is applied to vertical plates in order to deflect the beam in the ‘y’ direction. But the simultaneous force exerted in the x and y directions deflects the beam in such a way that a waveform is displayed on the screen. Now, the focus accelerated, and deflected beam strikes the screen. The screen is coated with phosphorous material which converts the electrical energy into light. All the working parts of CRT are enclosed in an evacuated glass envelope. The electrons striking the screen release secondary electrons. These secondary electrons are collected by Aquadag which is connected to the second anode, the collection of secondary electrons is required to keep the CRT screen in an electrical equilibrium state.

Hence from the above discussion, it is clear that the X-Y plate is not part of an electron gun.