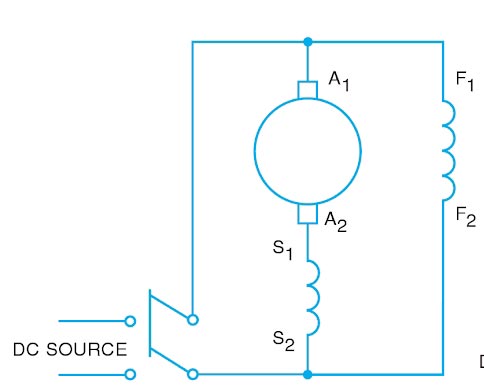 Compound-wound motors are used whenever it is necessary to obtain speed regulation and torque characteristics not obtainable with either a shunt or a series motor because many drives need a fairly high starting torque and a constant speed under load the compound wound motor is suitable for these applications. Some of the industrial applications include drives for passenger and freight elevators, stamping presses, rolling mills, and metal shears.

Cumulative compounding combines the characteristics of both series and shunt motors. Compound motors have both shunt and series field windings installed on the same poles. Series windings may be differentially or cumulatively compounded. Subtracting from or adding to the magnetizing force of the shunt field causes either reduced or increased armature speed with load. Cumulative compounding gives greater torque than possible with a simple shunt motor because of the greater amount of main field flux available. Increased flux causes the speed to drop off more rapidly than for the shunt motor but not as much as for the series motor. The cumulative compound motor will develop high torque with any sudden increase in load. At light loads, the motor will not run away because the shunt field provides constant field flux. Cumulative compound motors are often applied to loads requiring high starting torque and fairly constant operating speed under normal conditions.