1. Which of the following statement regarding pattern and casting is true?

Answer.2. The pattern is the replica of the casting object

2. The process of making a pattern is called as

The pattern is a direct duplication of the object, the pattern closely confirms to the shape and size of the desired casting except for a few variations due to the essential allowances provided in the pattern. The process of making patterns is known as pattern making.

3. For making a Master pattern which material is/are generally used

4. Which of the following carries the mould cavity where the metal is to be poured?

A pattern may be used for forming an impression known as mold in damp sand or other suitable moulding material. This mould is a cavity which when filled with molten metal that is allowed to solidify forms a reproduction of the pattern called casting. Since it is a direct duplication, the pattern closely confirms the shape and size of the desired.

5. A pattern is always made _____ the required size of the casting.

Patterns are not made to the correct sizes of the castings. Patterns are made slightly larger than the required castings in order to take care of various factors such as shrinkage, distortion, draft, machining, and rapping, etc. Thus, when a pattern is produced, certain allowances are given on the sizes specified in the finished goods drawing, to ensure that the casting produced from that pattern when comes to finished goods store/part of assembly conforms to specified sizes.

6. The extra size given on the pattern is called as

The patterns are not made of the exact size as that of the desired casting because such a pattern would produce undersize casting. When the pattern is prepared, certain allowances are given on the sizes specified in the finished component drawing so that the casting produced from that pattern after it has been finished and machined will conform to the specified size. This extra size given on the pattern is called pattern allowance.

7. While designing pattern, the allowance commonly used are

Reasons for providing pattern allowance: Pattern allowance is provided for the following reasons: Metals shrink in size when they solidify, Castings require machining and/or other surface finishing operations, Castings tend to warp or bend during solidification.

The various types of pattern allowances are:

8. Which of the following is ‘not’ an allowance given to the pattern for casting?

A core is a hole or cavity that is desired in the casting to help reduce the amount of material removed later or to establish a wall thickness. Cores are made either from clean sand mixed with binders such as resin and baked in an oven for hardening or from ceramic products when a more refined surface finish is required. When the pattern is made, a core print is created as a place for positioning the core in the mold. After the mold is made, the core is then placed in position in the mold at the core print.

9. To compensate for the shrinking of metal during casting which pattern allowance is generally preferred?

Shrinkage Allowance: When molten metal is poured into the mould it will solidify and cool. During cooling, the metal will shrink and reduce in size. To compensate for this, the pattern is made larger than the required casting. This extra size given on the pattern for metal shrinkage is called shrinkage allowance.

10. On which of the following factors does shrinkage allowance depends?

(i) Pouring temperature of the molten metal

(ii) Design and dimensions of castings

11.The extra amount of metal that is provided on the surface to be machined or finished is called

All the castings are to be machined to finish the rough surfaces and to remove excess metal. For this purpose, the pattern is made larger than the required casting. This extra size added to the pattern for machining purposes is called machining or finish allowance. In general, a machining allowance of 3 mm is given for ferrous metals, iron, and steel. For non-ferrous metals like brass and aluminum, a machining allowance of 1.5 mm is given.

12. The  machine allowances is/are provided due to which of the following factors

The machining allowance is provided due to the following factors:

13. The following diagram shows the application of which of the allowances given to a pattern? 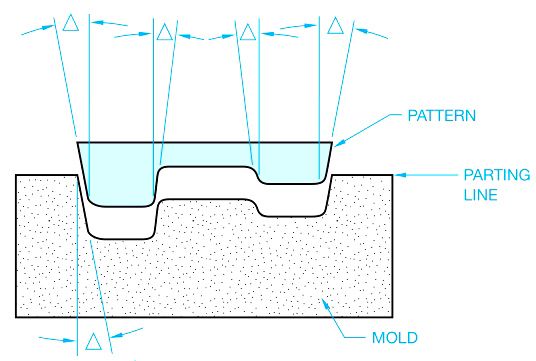 14. To eliminate this defect, the shape of the pattern is thus bent in the opposite direction the allowance used is

Distortion or Camber Allowance:- Sometimes the castings because of their size, shape, and type of metal, tend to warp or distort during the cooling period. This is due to uneven shrinkage, uneven metal thickness, or to one surface being more exposed than another, casting it to cool more rapidly. To overcome this distortion the shape of the pattern is thus bent in the opposite direction. This feature is called distortion or camber allowance.

For example, a casting shaped like a letter U will be distorted with the legs diverging, instead of parallel. For compensating this condition, the pattern is made in such a way that the legs converge but, as the casting cools, the legs straighten and remain parallel. Distortion allowances range from the standard finish allowance up to 20 mm when large castings are considered.

15. By which of the following reasons Distortion of metals during cooling takes place?

Distortion or warpage of casting during cooling takes place due to:

(i) Uneven shrinkage of different parts of a casting

(v) One surface being more exposed than another or different rates of cooling.

Answer.4. The metal used in Casting

Casting is one of the important manufacturing processes in which the starting material is heated sufficiently to transform it into a liquid state. Such molten metal is poured into the mold cavity and allowed to solidify. The object after solidification is taken out from the mold. To manufacture a wide variety of products of desired shape and size. The department of the workshop where castings are produced is known as a foundry. The requirements of producing a casting are:

(1) Preparation of a pattern (replica of the desired casting).

(2) Preparation of mold or cavity with the help of pattern.

(4) Pouring the molten metal into the mold.

(5) Allowing the molten metal to solidify.

(6) Breaking the mold to retrieve the casting then its cleaning and inspection etc.

The quality of casting and the final product will be affected to a great extent by the planning of the pattern maker. The important considerations of a pattern maker to properly plan the pattern for the desired results are:

(i) Appearance and surface finish of the casting to be produced;

(ii) Number of castings to be produced;

(iv) Method of withdrawal of pattern;

(v) Size and shape of the casting to be produced.

Note:- Metal used in casting is a concern till its melted and molted metals fills the cavity. This does not affect the final product physically, once the metal has solidified.

17. The type of a pattern is most likely to depend upon which of the following term?

There are several materials commonly used in the construction of patterns. Modern pattern making employs the use of materials that can be easily shaped and are durable. The type of pattern material chosen depends upon the following factors :

(a) The design of casting,

(b) The number of castings to be produced,

(c) The type of casting and molding process used in foundry

d) The degree of accuracy and surface finish required.

18. What is the function of cores in the casting process?

Answer.3. To make holes and cavities

Casting is sometimes required to be made hollow internally or having few holes, cavities, projections, undercuts or pockets on its external surface. This is achieved by using cores during casting or by subsequent machining of the casting. Usually, the large hollows in the castings are achieved by cores. Contours of the core are exactly similar to the cavities, pockets or holes it is supposed to create in the casting.

Core: Core is a sand mass used to make a cavity or a hole in a casting. The shape of the core is similar to the required cavity in the casting made. The core is made using core sand in core boxes.

19. The different type of pattern according to their geometrical construction are

The selection of a pattern depends upon the number of castings required and their geometrical structure.

A solid pattern is a wooden pattern, also called one piece pattern because of its constructional feature. It is used when the shape of castings to be produced is not complex and also their numbers are small.

A split pattern is used for complex castings not obtainable from solid patterns. The pattern is split along the parting line into two parts, one for cope and another for drag.

A gated pattern is useful for small size castings to be produced in large numbers. It consists of multi cavity molds which are fed by a single runner.

20. In distortion allowance the shape of the pattern is

Answer.1. Bent in the opposite direction

Sometimes the castings because of their size, shape, and type of metal, tend to warp or distort during the cooling period. This is due to uneven shrinkage, uneven metal thickness, or to one surface being more exposed than another, casting it to cool more rapidly. To overcome this distortion the shape of the pattern is thus bent in the opposite direction. This feature is called distortion or camber allowance.