Ques 11. Ripple in the output current of a step-down chopper feeding RLE load is maximum when the duty cycle is equal to:

Chopper is a static device.  A variable dc voltage is obtained from a constant dc voltage source. It is also known as the dc-to-dc converter. Chopper is widely used for motor control and regenerative braking. 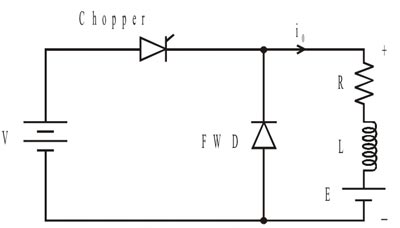 Note:-  The expression of ripple and duty cycle is not included here and will be discussed in the theoretical section.

Ques 12. Which of the following are constant losses in Transformers?

Basically, there is 2 Type of Losses In a transformer

Hysteresis loss is due to the reversal of magnetization in the transformer core. This loss depends upon the volume and grade of the iron, frequency of magnetic reversals, and value of flux density. It can be given by, the Steinmetz formula:

Eddy current loss: In a transformer, the alternating current in the primary produces alternating flux in the core, this flux links with the secondary of the transformer and induces emf in the secondary, it may be possible that flux also links with some other conducting parts of transformer such as ferromagnetic core or iron body and induces local emf in these parts of transformer which will cause a circulating current to flow in these parts causing heat loss. These currents are called eddy currents and this loss is called eddy current loss.

Eddy current losses in the transformer is given by

Where Ke = Eddy’s current constant
t = thickness of the core

From the above discussion, we can say that the Hysteresis loss depends upon both voltage and frequency, while the eddy current loss mainly depends upon voltage.

As for transformers, normally we keep the supply voltage and frequency constant in regards to maintaining stability and reliability. So, the iron losses also remain constant. 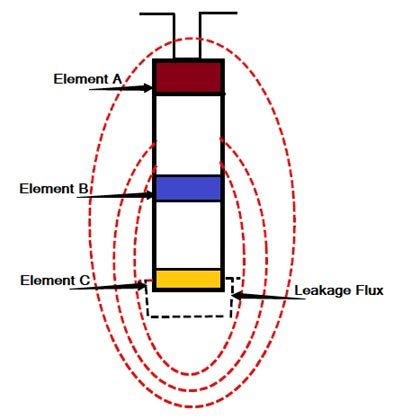 There is no constructional difference between the stator of the deep bar motor and that of an ordinary induction motor. The rotor consists of deep bars, short-circuited by two end rings one on each side. A bar may be assumed to be made up of a number of narrow layers connected in parallel. It is seen that the topmost layer element is linked with minimum leakage flux and therefore its leakage inductance is minimum. On the other hand, the bottom layer links maximum flux, therefore its leakage inductance is maximum.

At starting the rotor frequency is equal to the supply frequency. The bottom layer element offers more impedance to the current flow the upper layer hence the maximum current flows through the top layer and the minimum through the bottom layer. This unequal current distribution causes the effective rotor resistance to increase. With a high rotor resistance at starting condition, the starting torque is relatively high & starting current is low as desired.

Now under normal operating conditions, the slip and the rotor frequency are very small. The reactance of all the layers is small compared to their resistances. The impedances of all the layers are nearly equal, so current flows through all the parts of the bar equally. The resulting large cross-section area makes rotor resistance small, resulting in good efficiency at low slips.

Ques 14. Two transformers with identical voltage ratings are working in parallel to supply a common load. The percentage impedance of one transformer is higher compared to that of other. The load sharing between the two transformers will:

Ques 15. The number of comparators required for an 8-bit flash ADC is:

From the following data, the fig is shown below

The voltmeter shows 5V which means it shows voltage drop across 600 ohm Resistance along with its internal Resistance, the parallel combination of resistance would be, (let it be R1)

Find the current through it ‘I’

This is the same current that flows through the circuit.

As 5 volts drop across 600 ohm Resistance, the remaining 30 volts would appear across unknown resistor ‘R’

Ques 17. A three-phase slip ring induction motor is fed from the rotor side with the stator winding short-circuited stator is:

Ques 18. In the circuit given below, the value of R required for the transfer of maximum power to the load having a resistance of 3Ω will be? 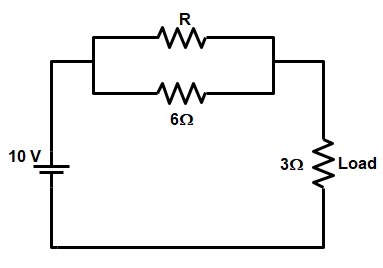 Note:- If there is “Zero” in the option then you should check as the right Option.

Ques 19. In the following given circuit what will be the value of current I in the 5Ω resistor? 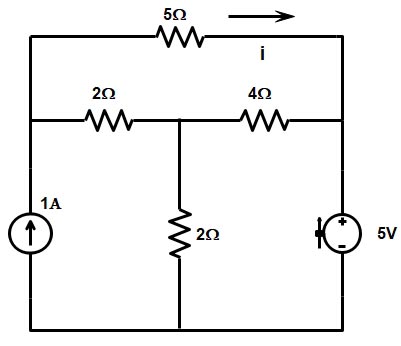 Now the circuit will be as shown below 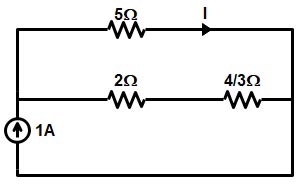 Now 2Ω and 4/3Ω are in series, therefore, its equivalent resistance is 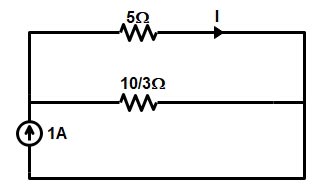 Now According to current Division Rule

Now Opening the current source and applying the KVL we get 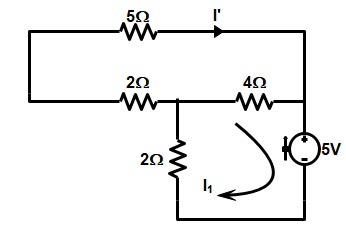 Maximum Value of current is given as Im = 2.5

As we know that

The load Impedance is Given as (R + jX)