Ques 51. In order to switch off and EHV circuit for maintenance, the following sequence is adopted:

Switching sequence – to turn on or off a bus bar, equipment, power plant requires proper steps and skill. A single mistake would cause an accident.

Step 1: Open the circuit breaker: CB is a device that can make and break the circuit under normal as well as under faulty conditions manually or automatically.

Step 2: Open the isolator: An isolator is a device that always operates under no-load conditions. This is because it has no provision for arc quenching.

Its function is to isolate the circuit after operation of the circuit breaker and discharge the grapes charges to earth through the earth switch.

Step 3: Operate the Earth switch: After opening the circuit breaker and manually disconnecting the isolator the next is to engage the earth switch. Its function is to discharge any remnant charge due to residual magnetism which might be lethal to humans and expensive testing equipment.

Ques 52. For the circuit given in the fig, the Thevenin’s voltage and resistance as seen at AB are represented by: 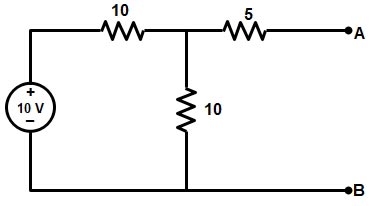 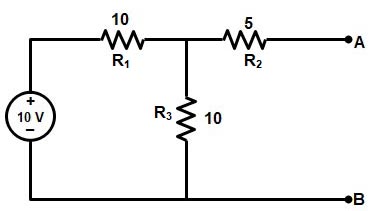 The Thevenin voltage e used in Thevenin’s Theorem is an ideal voltage source equal to the open circuit voltage at the terminals. In the example below, the resistance R2 does not affect this voltage and the resistances R1 and R3 form a voltage divider, giving

Ques 53. Why are shunt reactors connected at the receiving end of a long transmission line system?

Shunt Reactor compensation at the receiving end help to reduce the effect of capacitance thus reducing the Ferranti effect.

The shunt Reactor absorbs the excess reactive power during no load or light load conditions and thus helps in stabilizing the voltage of the Transmission Line.

Ques 54. A 10Ω resistor is connected in parallel with a 15Ω resistor and the combination in series with a 12Ω resistor. The equivalent resistance of the circuit is:

Since the resistor 10Ω and 15Ω are connected in parallel, therefore, its equivalent resistance

When a conductor of resistance Ro at 0°C  is heated to t° C. Its resistance Rt after heating is given by

Ques 57. What is called the Electro-Motive Force (EMF) of a voltage source?

If there is no load connected to the Voltage source, then no-load current will flow, and there will no internal voltage drop.

The voltage appearing across the voltage source’s terminals under this condition is called its open-circuit voltage or no-load voltage which exactly equals the electromotive force (e.m.f. of that source).

A voltage source open-circuit, or no-load, voltage corresponds to its electromotive force.

Ques 58. A permanent magnet moving coil ammeter has a coil resistance of 99 ohm and a Full-Scale Deflection (FSD) current of 0.1mA. Shunt resistance is 1 ohm. Current through the meter at 0.5 F.S.D is:

Ques 59. For power measurement of the three-phase circuit by two wattmeter method, when the value of power factor is less than 0.5 lagging:

When one wattmeter reads negative during the measurement of power by two wattmeter method. The power factor of the load in such a case will be less than 0.5 lagging.

Ques 60. One international ohm is equal to