Ques 11. The function of conservator in a transformer is to:

The conservator is a cylindrical tank mounted on supporting structure on the roof of the transformer’s main tank.

Satisfactory operation of a transformer solely depends on the condition of the oil.The oil should not be allowed to come in contact With atmospheric air as it may take up moisture which may spoil the insulating properties. Also, air may cause acidity and sludging of oil. To prevent this, many transformers are provided with conservators. The function of a conservator is to take up contraction and expansion of oil without allowing it to come in contact with outside air. 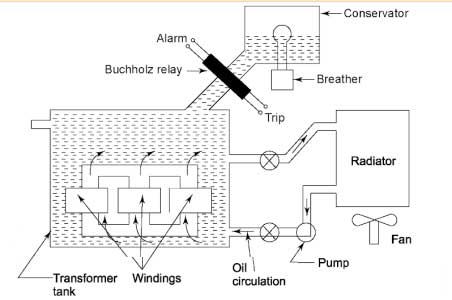 Ques 13. A diode is forward biased if.

A diode is a two-electrode (two-terminal) device that acts as a one-way conductor. The most basic type of diode is the PN-Junction diode.When forward bias PN junction diode conducts. When reverse biased, it effectively blocks the flow of charge (current).

Based on the characteristics of a switch the following statements can be considered about the ideal diode:

Ques 14. Which of the following is the correct expression of Power factor?

There are many ways to understand POWER FACTOR

⇒ One definition expresses power factor as the cosine of the phase displacement angle between the circuit voltage and current.

⇒The other definition is that power factor is the ratio of active power to apparent power in a circuit. It is generally given in percent. Most utilization devices require two components of current, active and reactive. The power-producing current (active current) is the current that is converted by the equipment into work, usually in the form of heat, light, or mechanical power. The unit of active power is the watt. The magnetizing current (reactive current) is the current required to produce the flux necessary to the operation of electromagnetic devices. The unit of reactive power is the var. 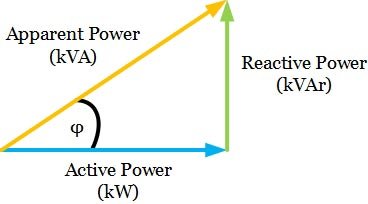 Ques 15. A single-phase transformer has 400 turns on primary and 50 turns on secondary, cross-sectional area of the core is 80cm2 and flux density is 12wb/cm2, if a 440 volt 50 Hz AC supply is given to the primary side, What will be the induced EMF and frequency on the secondary side of the transformer?

The transformer is the static device which is used to transfer electricity from one AC circuit to the other AC circuit, by either increasing or decreasing V or I.

Hence whatever is the supply frequency at the input of transformer same is the value of output voltage of the transformer.

Now according to the transformer Ratio

The average power in an AC circuit expressed in terms of the RMS voltage and current is;

Where ø is the phase angle between the voltage and current. And ‘cos ø’ is called the Power Factor (PF).

Ques 17. MCB protects a circuit from

This is an electro-mechanical device which breaks (that is, opens) the circuit when the current in it exceeds a given value. Unlike fuses, which melt at 50% to 100% overload, MCBs break the circuit at just 5% to 15% overload and thus provide better safety. Note that an MCB protects the circuit against both overloads and short-circuit. 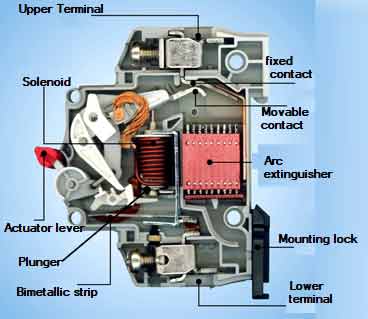 An MCB  incorporates a thermal and magnetic tripping device. The load current flows through the thermal and the electromagnetic mechanisms. In normal operation, the current is insufficient to operate either device, but when an overload occurs, the bimetal strip heats up, bends and trips the mechanism. The bimetallic strip is made up of copper and iron pasted together. A bimetallic strip is used to convert a temperature change into mechanical displacement. The time taken for this action to occur provides an MCB with the ability to discriminate between an overload which persists for a very short time, for example, the starting current of a motor, and an overload due to a fault. The device only trips when a fault current occurs. This slow operating time is ideal for overloads but when a short circuit occurs it is important to break the faulty circuit very quickly. This is achieved by the coil electromagnetic device.

(b) To prevent high short-circuit current from damaging circuit elements, the MCB is also provided with a magnetic coil and plunger (known as the solenoid ). At normal operating condition, the electromagnet is not strong enough to release the contact.

When the short circuit occurs in the circuit, the current energizes the solenoid which attracts the plunger which strikes the trip lever which immediately releases the latch mechanism to open the contacts. The instantaneous opening of contacts is achieved due to the rapid operation of the solenoid.

Ques 18. The current density of a  conductor of large cross-sectional Area when the same current is flowing through them 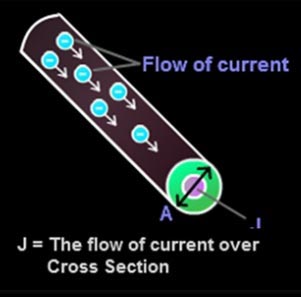 The formula for Current Density is given as,

I = current flowing through the conductor in Amperes

A = cross-sectional area in m2.

Current density is expressed in A/m2.

Ques 19. How is an electric element capacitor is specified?

Electrical elements are conceptual abstractions representing idealized electrical components, such as resistors, capacitors, and inductors, used in the analysis of electrical networks.

Capacitance is defined as that a capacitor has the capacitance of One Farad when a charge of One Coulomb is stored on the plates by a voltage of One volt.

So the capacitor can be specified by Voltage, Capacitance, Charge(coulomb).

Capacitance is the ratio of the change in an electric charge in a system to the corresponding change in its electric potential.

Ques 20. Which of the following connection is best suited for 3-phase, 4 wire service:

3-phase, 4 wire service is used in a distribution transformer. In 3 phase 4 wire system, neutral wire carries return current in case any fault occurs in the line there is more flexibility to keep the system running since it may only affect one of the phases.

The delta connection is used for transmission purpose because, In a 3-phase, delta -connected system, no wire exists for the return current i.e there is no neutral point, also the line current gets divided by √3 and hence the cross-sectional area of the conductor to be used in each of the three phases of the primary winding will be reduced. Thus saving of copper.

The star connection is used for distribution purposes because star connection has neutral point and neutral wire carries return current in case of any fault occurs in the line there is more flexibility to keep the system running since it may only affect one of the phases.

Ques 21. Which type of resistor is used for overvoltage protection:

“Varistor” is the generic name for a voltage-variable resistor. These devices obey the relations V = (I x R). where R is a function of V or I, and for which R decreases as the magnitude of V (or I) increases. A Varistor is inherently a non-linear bipolar device: its characteristics are not dependent on polarity.

Surge protection devices are used widely to protect the electric devices from destructions by an over-voltage such as the lightning and electrostatic. A typical surge protection devices are an arrestor which is put in the top of the telephone pole and metal oxide varistor which is used in the small-scale circuits. These devices have a non-linearity correlation between voltage and current. When a transient occurs, the varistor resistance changes from a very high stand-by value to a very low conducting value. The transient is thus absorbed and clamped to a safe level, protecting sensitive circuit components.