Ques 22. Which of the following relation is correct?

Electrical conductivity or specific conductance is the reciprocal of electrical resistivity and measures a material’s ability to conduct an electric current.

In electromagnetism, permeability is the measure of the ability of a material to support the formation of a magnetic field within itself. Hence, it is the degree of magnetization that a material obtains in response to an applied magnetic field.

A measure of the resistance of a material to the establishment a magnetic field within it, equal to the ratio of the intensity of the magnetic.

The tendency of a magnetic circuit to conduct magnetic flux equal to the reciprocal of the permeability of the circuit.

In other words: In magnetic circuits, we have specific reluctance which is also, called as reluctivity. The reluctivity is the reciprocal of permeability

Ques 23. The rated speed of the induction Motor is 1410 RPM. What is meant by statement slip s=0

or Nr = Ns hence the motor runs at the synchronous speed.

3-phase, 4 wire service is used in a distribution transformer. In a 3 phase 4 wire system, neutral wire carries return current in case any fault occurs in the line there is more flexibility to keep the system running since it may only affect one of the phases.

The delta connection is used for transmission purpose because In a 3-phase, delta -connected system, no wire exists for the return current i.e there is no neutral point, also the line current gets divided by √3 and hence the cross-sectional area of the conductor to be used in each of the three phases of the primary winding will be reduced. Thus saving of copper.

The star connection is used for distribution purposes because star connection has neutral point and neutral wire carries return current in case of any fault occurs in the line there is more flexibility to keep the system running since it may only affect one of the phases.

Ques 25. Which of the following instrument is used to measure the alternating current  only:

Moving Iron Voltmeter is used to measure both current and voltage but it can work on both AC and DC.

Moving Iron (attraction – type) ammeter is used to measure both current and voltage but it can work on both AC and DC.

Induction-type instruments are used only for A.C measurement and can be used either as an ammeter voltmeter or wattmeter. However, the induction principle finds its widest application as a watt-hour or energy meter.

Ques 26. For testing the earth fault of an electric Kettle, the megger reads zero, this indicates:

An insulation resistance test is a correct term for this form of testing, not a megger test, as megger is a manufacturer’s trade name, not the name of the test.

Cables are generally laid directly in the ground or in ducts in the underground distribution system. For this reason, there are little chances of faults in underground cables. However, if a fault does occur, it is difficult to locate and repair the fault because conductors are not visible. Nevertheless, the following are the faults most likely to occur in underground cables 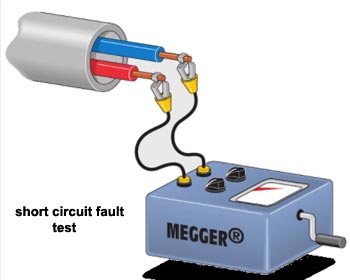 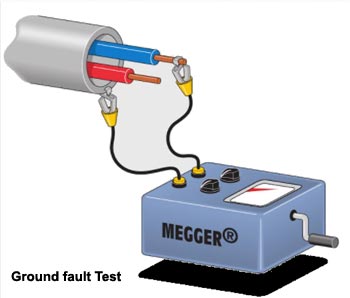 Ques 27. An energy-meter has a constant of 600 revolutions per kWh. If meter makes 10 revolution in 20 seconds. What is the load in kW?

Ques 28. Equivalent resistance point A and  B in the following figure is

From the above circuit diagram the resistance 4Ω and 6Ω are connected in parallel therefore equivalent resistance = 4×6/4+6 = 2.4Ω

Now 2.4Ω and 10Ω are connected in series hence total resistance at point A and B is

The full-wave rectifier can be built in the following ways: 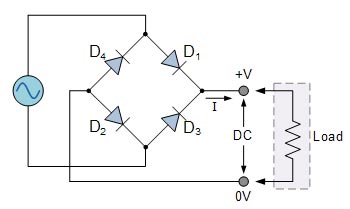 During the positive half cycle of the supply, diodes D1 and D2 conduct in series while diodes D3 and D4 are reverse biased and the current flows through the load as shown below.

During the negative half cycle of the supply, diodes D3 and D4 conduct in series, but diodes D1 and D2 switch “OFF” as they are now reverse biased.

Ques 30. The Sum of all current meetings at a point is zero. Stated law is

The principle of conservation of electric charge implies that: 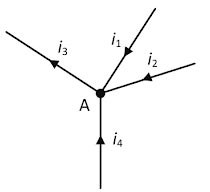 The algebraic sum of currents in a network of conductors meeting at a point is zero.

The law is based on the conservation of charge whereby the charge (measured in coulombs) is the product of the current (in amperes) and the time (in seconds).

The principle of conservation of energy implies that

The algebraic sum of the products of the resistances of the conductors and the currents in them in a closed-loop is equal to the total emf available in that loop.

Ques 32. In case of a synchronous motor starts but fails to develop full torque, the probable cause could be:

During Running condition, When one line supplying a three-phase motor is open-circuited, a synchronously rotating field will still be produced and the motor will continue to run and provide torque. However, a significant negative phase sequence field will also be produced, which will induce extra losses in the secondary winding and produce an additional Pulsating torque.

Short circuit Line: In case if one of the three phases is short-circuited in the synchronous motor, large transient current will flow through the motor which may damage the winding of the motor.

The reverse field winding: Fixed excitation in the synchronous machine is given in order to develop the north and south pole respectively after rotating the rotor near or equal to synchronous speed as that of the supply so that the rotor and stator poles will get interlocked with the poles of the stator and the machine will start rotating at the synchronous speed with supply without the need of any prime mover.

Now if we give an ac supply as the excitation :

the north and south pole will generate on the rotor pole alternately changing with supply frequency, hence there can not be an interlocking between the stator and rotor poles and the machine will fail to start.