Ques 51. Wound rotor and squirrel-cage motors with the high slip which develop maximum torque at standstill are used for

A punch press is a type of machine press used to cut holes in the material. Punch press-driven machines impose pulsating loads or require frequent starting of the motor. For such type of Machine, Class D Motor is best suited.

Class D motors are characterized by high starting torque, low starting cut rent, and high operating slip. The rotor cage bars are made of high-resistance material such as brass instead of copper. The torque-speed characteristic is similar to that of a wound-rotor motor with some external resistance connected to the rotor circuit. The maximum torque occurs at a slip of 0.5 or higher. The full-load operating slip is high (8 to 15 percent), and therefore the running efficiency is low. The high losses in the rotor circuit require that the machine be large (and hence expensive) for a given power. These motors are suitable for driving intermittent loads requiring rapid acceleration and high-impact loads such as punch presses or shears. In the case of impact loads, a flywheel is fitted to the system. As the motor speed falls appreciably with load impact, the flywheel delivers some of its Kinetic energy during the impact.

As we know that the in wound Induction motor we can achieve high starting torque by adding some external resistance. There it can be used for press and punches.

Note:- The best-suited motor for press and punches is cumulative compound Motor

The characteristics of cumulative compound motor lie between those of shunt and series motors. The series field provides a high starting torque and the shunt field prevents overrunning in the no-load condition.

These motors are used for drives where high starting torque is required with the probability of the load being totally removed such as punch, press, shears, planning machine, conveyors, crushers, bulldozers, lift haulage gears, mine hoist, power fans, rolling mills, stamping press and the large printing press.

Ques 52. In the jaw crushers, a motor has to often start against

Crushers are slow-speed machines employed for coarse reduction of large quantities of solids. Jaw crushers, gyratory crushers, and smooth-roll crushers are the main types of crushers. They operate by compression and can break large lumps of hard materials. They find application in rockery and mining industries.

Jaw crushers consist of two crushing faces (jaws)—one of them is fixed vertically to the frame, while the other one is movable, which is either pivoted at the top or at to bottom. Depending on the type of arrangement of the movable jaw, the jaw crushes are classified into two types — blade and dodge. 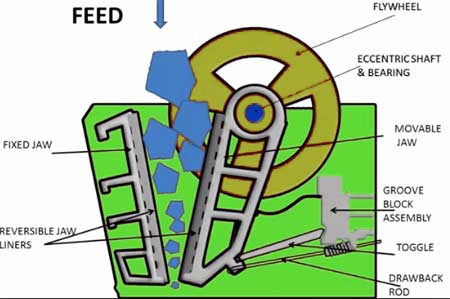 Crusher driver: The motors used in crushers are of the slip-ring type induction motor because it can provide high starting torque against the heavy load. Stalling considerations play a very important part in the design of these motors. Normally, the motors are designed to withstand locked rotor current during running, without any external resistance introduced in the rotor circuit, for one minute. This is quite important since very often the crushers tend to get jammed when a big sized boulder gets trapped between the jaws of the crushers. Generally, the starting torque for such drives is limited to 160 percent of the full load torque and the pull out torque is limited to 200 percent to 250 percent of the full load torque. The motors are also normally designed for 15 percent overload for 15 seconds and 20 percent overload for 10 seconds taking into consideration the adverse loading conditions encountered in practice.

Ques 53. Which motor is usually preferred for the elevator nowadays?

In older days Elevators were run by DC motors, since their RPM was easy to control, and was much cheaper. But it had worse torque characteristics, hence has a lot of jerks and bumps for the users.

Then as time passed Induction motors began to hit the market and most of the industries now use them for its robust construction and withstand worse working conditions with almost no maintenance. Induction motors are AC motors and controlling their speed was tough hence they were not recommended for Elevators until the VFD’s came in.

Hence most of them in modern days use 3-phase induction motors with variable frequency drive electronic controls.

Ques 54. The motor used in the synthetic fiber mills are

Textile machinery is driven electrically by individual motor drives rather than by group drive. Normally total enclosed fan cooled motors of special textile design (TEFC-SC) are used. A flywheel looms motor is used to get better loom performance and reduced power consumption. Drip proof motors are used in wet locations. When several motors are used a separate packaged power unit of the silicon controlled rectifier type is used for adjustable voltage D.C controlled drive. For different types of process in the manufacture of cloth different Iyyes of motors are used.

Ques 55. Which of the following motor is preferred for synthetic fiber mills?

The reluctance motor, also called a reluctance-synchronous motor, is an induction motor with a modified squirrel cage rotor such as those shown in Figure The notches, flats or barrier slots provide equally spaced areas of high reluctance. The sections of rotor periphery between the high-reluctance areas are called salient poles; the number of salient poles must match the number of stator poles.

When the stator is energized. the rotor accelerates as a squirrel-cage induction motor. As the rotor approaches synchronous speed, the slip is very small and the rotating flux of the stator moves slowly past the salient poles of the rotor. At some critical speed, the low-reluctance paths provided by the salient poles cause them to snap into synchronism with the rotating flux of the stator. When this occurs, the slip is zero, induction-motor action ceases, and the rotor is pulled around by simple magnetic attraction called reluctance torque.

The constant-speed characteristic of reluctance motors, their simple construction, ruggedness, and particularly their low cost make them desirable for the more economical timing devices, turntables, and tape recorders. They are also used in automatic processes such as are found in the food processing and packaging industries.

Synthetic textile industries often require that as many as 90 to 100 machines, each driving different sections of the production line, be operated in synchronism over a wide range of speeds. Three-phase reluctance motors rated at 100 hp and more are used in larger power applications where the complexity and cost of “standard” synchronous motors are not warranted.

Ques 56. The power factor of the reluctance motor at full load is

A reluctance motor is a synchronous motor with salient rotor structure, but no field windings or permanent magnet excitation at all. The air-gap flux is provided entirely from the stator side a.c. armature windings which results in a low lagging power factor, typically 0.65 to 0.75 at full-load. Reluctance torque is developed as the salient-rotor poles align themselves with the synchronously rotating stator magnetic field. Like wound-field and permanent magnet machines, the synchronous reluctance motor has no synchronous starting torque and runs up from standstill by induction motor action in an auxiliary starting winding.

Reluctance motors may be used on both fixed frequency supplies and inverter supplies. These motors tend to be one frame size larger than a similarly rated induction motor and have a low power factor (perhaps as low as 0.6) and poor pull-in performance. As a result, their industrial use has not been widespread except for special applications such as textile machines where large numbers of reluctance motors may be connected to a single ‘bulk’ inverter and may maintain synchronism. Even in this application, as the cost of inverters has reduced, bulk inverters are infrequently used and the reluctance motor is now rarely seen.

Ques 58. The efficiency of the reluctance motor is around

The reluctance motor is a cheap and reliable synchronous motor that requires no d.c. excitation. Commercial motors are available in ratings of 20 kW or more. The machine has a 3-phase stator winding similar to that of an induction motor, and a rotor without windings. For a given frame the output is about 60% of that of an induction machine, and the motor has a slightly lower efficiency.

Reluctance torque is maintained only at synchronous speed so that some form of cage winding must be incorporated for starting. Direct switching is employed, giving starting currents up to 4 6 times full-load current. The effective rotor resistance has an important influence on the starting and pull-in torques.

The requirements for a satisfactory motor are good synchronous performance (efficiency, power factor, and pull-out torque), good pull-in torque (especially for high-inertia loads) and stability. Some of these conflict: increasing the ratio of d- and q-axis reluctances gives higher output and pull-out torque, but lower pull-in torque and impaired stability. The design is influenced particularly by the load inertia.

Motors with change-speed windings are possible, and motors can be built for variable frequency (2 − 200 Hz) but these are liable to instability at the lower end of the range.

Ques 59. A synchronous reluctance motor on over-load runs as

In a synchronous reluctance Motor when the stator is energized. the rotor accelerates as a squirrel-cage induction motor. As the rotor approaches synchronous speed, the slip is very small and the rotating flux of the stator moves slowly past the salient poles of the rotor. At some critical speed, the low-reluctance paths provided by the salient poles cause them to snap into synchronism with the rotating flux of the stator. When this occurs, the slip is zero, induction-motor action ceases, and the rotor is pulled around by simple magnetic attraction called reluctance torque.

If the shaft load is increased to a value that causes δ > 45°, the increased length of the magnetic flux path between the centerline of the rotating staler poles and the centerline of the corresponding rotor poles causes a decrease in flux and hence a decrease in magnetic attraction. In effect, the flux lines are “over-stretched,” the rotor falls out of synchronism, and the machine runs as an induction motor at a slip speed determined by the amount of overload.

Ques 60. The size of an excavator is  expressed in the terms of

An excavator is a machine used for digging into the ground such as JCB. The size of an Excavator is expressed in the terms of Cubic Meter, and the bucket capacity varies from 0.5m3 to 13m3.