Ques 71. In the case of contactor the rated current can carry upto ______ hours without exceeding temperature.

The rated thermal current is the maximum current the contactor can carry for 8 h without exceeding temperature rise limits.

Ques 72. The saturable core reactor is generally is a

A saturable core reactor acts as a variable inductance connected in series with a load across an input ac power supply. It looks like a transformer having two windings wound on a core of steel as shown in the figure. One of these windings named control winding (CW) receives a small dc current controlled by a potentiometer and a fixed dc voltage source. This acts as an input bias signal that controls the amount of alternating current that can flow through the other winding, namely the gate winding (GW) and the load in series. The alternating current in the gate winding produces an objectionable ac voltage in the control winding that mad disturb the fixed dc bias in it. 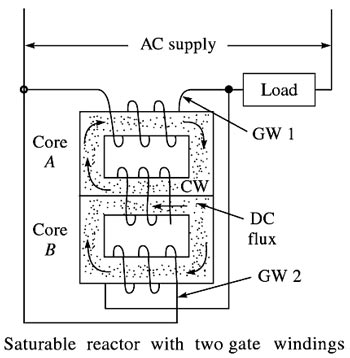 Therefore most saturable reactors include two identical core! A and B as shown in Figure each steel cork has its own ac winding named GW1 and GW2 while the dc coil surrounds one leg of each core Here the two ac windings GW 1 and GW2 art connected in parallel and in phase opposition to each other. Thus within the dc coil, that is, CW two flux movements are in opposite directions a the same instant of time; therefore, no ac voltage is superimposed on the dc coil. 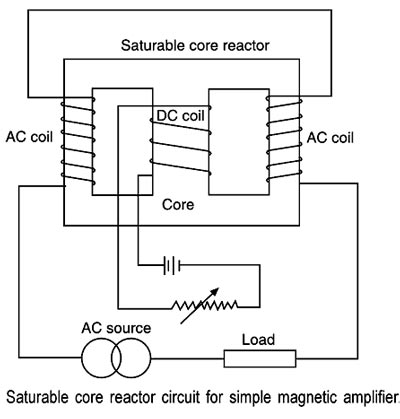 Saturable core reactors are relatively inefficient (90% large in size, and require water or air cooling, depending upon their power rating. Their main advantage is their immunity t modest transients and overloads. Well-designed SCRs ca offer similar reliability at greater efficiency and reduced size

Ques 73. The application of suitable core reactor is

The most common saturable reactor consists of a three-legged core where each coil is wound on separate magnetic “leg”. The two AC coils in Fig. should have relatively low and equal number of turns and the middle coil usually has the much higher number of turns. This gives the possibility of amplification through lower control current to obtain control over powerful circuits. Because of this in many cases, the (regulated) saturable reactor is used as a “Magnetic Amplifier”. The main difference between a magnetic amplifier and a saturable core reactor is that the magnetic amplifier uses a half of the magnetic loop and the amplifier uses the complete magnetic loop. Because of this, the term “Saturable Core” is often substituted by the term “Magnetic Amplifier”.

Ques 74. The application of the Magnetic amplifier is

Answer 1.Use for servo Motor drive

The magnetic amplifier is an electromagnetic device for amplifying electrical signals.

Following are the applications of the magnetic amplifier:

Answer.4  All of the above

LOSSES IN AN ELECTRICAL DRIVE SYSTEM

Energy conservation in an electrical drive is achieved by the reduction of losses in its various parts. Typical losses include the following:

Ques 76. Which of the following pair is used for frequency converter?

A conventional wound-rotor motor along with a squirrel cage induction motor may be used as a frequency converter to generate a frequency different from that of the utility company. The stator of the wound-rotor machine is connected to the utility line, and the rotor is driven at an appropriate speed by a motor M i.e Squirrel Cage Induction motor. The rotor supplies power to the 3-phase load at a voltage E2 and frequency f2 both of which depend upon the slip. 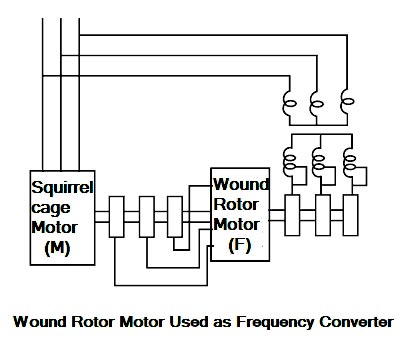 In general, the desired frequency is two or three times that of the utility company. According to above equation in order to attain this frequency, the slip must be positive and greater than 1. As a result, the shaft must be rotated against the direction of the revolving flux.

The operation of the frequency converter b then identical to that of an induction motor opera^ling as a brake. However, the power P usually dissipated as heat in the rotor is now available to supply power to the load. The converter acts as a generator.

Ques 77. The torque Motor design is very similar to that of

A torque motor can be thought of as being a linear motor that is folded to make a cylinder and whose ends are connected to each other. It is similar to a rotary synchronous motor with a very high number of pole pairs and has a large diameter. 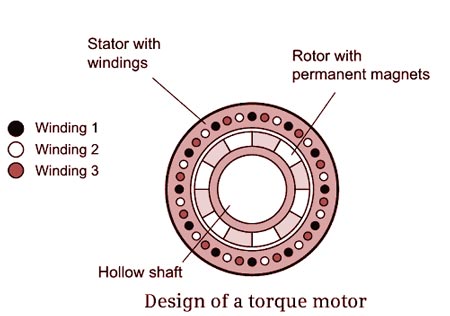 The windings in the stator are arranged offset by 120° per pole division to each other and fed with three-phase AC current. The stator current creates a high-pole rotating field which rotates slowly. The rotor follows accordingly. Due to its large diameter, the motor has an accordingly high torque.

Torque motors are available as built-in or complete motors. In the case of built-in motors, the motors do not have their own bearings. These motors must, therefore, be fitted on a machine shaft which has its own bearings. The stator and the rotor are supplied as separate components. As with linear motors, assembly requires special knowledge and skills.

Due to their large diameter, torque motors have a hollow shaft. This simplifies their integration into the driven machine. Torque motors are available in both air-cooled and water-cooled versions.

Torque motors can deliver torques from 100 Nm up to approximately 5 kNm and have speeds ranging from 10 rpm to 300 rpm.

Ques 78. The status Indicator of the Motor is useful when

Answer.3. Both of the above

Fixed-speed drives are operated at a single, constant speed. They possess only the equipment necessary for switching on and off, as well as for protecting against overload. It is not possible to vary the speed of the drive, which means that depending on the load the speed may fluctuate. Typical applications for fixed-speed drives are fans and pumps which are operated with an asynchronous motor direct-on-line.

The speed of variable-speed drives is adjustable and the drives can b operated at least two different speeds. In addition to an electric motor, these drives have a controller which is responsible for adjusting the speed. Depending on the application, the controller is accordingly complex and allows for different speed-ranges and accuracy.

The variable speed drive can be divided into three parts

Open-loop variable-speed drives have a continuously variable speed, However, there is no feedback of the actual speed, meaning that, depending on the drive type, there may load dependent deviation from the speed setpoint. A controller with an electronic power set lion is necessary for the speed control. Examples of this type of drive are asynchronous motors with frequency controllers and V/f control.

Closed-loop variable-speed drives also have a continuously variable speed but, in addition, measure the actual speed of the motor. In this. way, deviations in the speed from the speed setpoint can be recognized and corrected. To enable this, it is necessary to have a controller with the appropriate control algorithms. A very widespread implementation of the closed-loop variable-speed drive is the asynchronous motor with frequency controller and vector control.