1. Which of the following variety of copper has the best conductivity?

2. The tiny block formed by the arrangement of a small group of atoms is called the

Unit Cell: A unit cell is the smallest assemblage of atoms, ions, or molecules in a solid, beyond which the structure repeats to form the 3-dimensional crystal lattice.

3. On which of the following factors does the resistivity of a material depend?

Material can be characterized by its resistivity, denoted by p, which is independent of size and shape, The resistance of a homogeneous sample of material having resistivity ρ, length l, and uniform cross-sectional area A is given by

m = mass of the electron

Resistivity is defined as the resistance of a conductor of unit length and unit area of cross-section. Its SI unit is Ohm-m (Ω-m).

It follows from here that the resistivity of the material of a conductor depends upon the following factors :

4. Power cables capable of supplying large currents (30 A) have solid copper cores of cross-sectional area equal to 1.5 mm2. What is the resistance of a 10m length of such a cable?

Resistance of the conductor is given by

Resistance of the conductor is given by

Resitance of the conductor is given by

7. The number of atoms per unit cell in B.C.C. structure is

If the corners of the cube and the center of the cube are occupied by identical atoms then the crystalline structure is called a body-centered cubic structure (B.C.C). This structure is found in many materials like Na, Li, K etc.

The bcc unit cell is a cube (all sides are of the same length and all faces sharing a corner are perpendicular to each other) with an atom at each corner of the unit cell and an atom in the center of the unit cell. Each of the corner atoms is the corner of another cube, thus the corner atoms are shared among eight unit cells. It is said that bcc has a coordination number of 8 and a bcc unit cell consists of a net total of two atoms; one in the center and eight eighths from corner atoms. Some of the materials that have a bcc structure include lithium, sodium, potassium, chromium, barium, vanadium, alpha-iron, and tungsten. Metals that have a bcc structure are usually harder and less malleable than close-packed (e.g., face-centered cubic structured) metals such as gold. 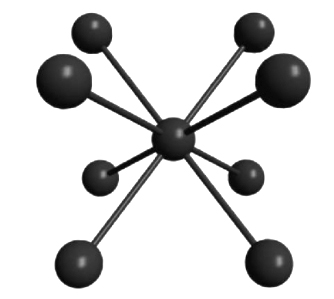 Piezoelectric effects are defined as “the phenomena of separation of charge in a crystal by mechanical stresses and the converse.”

Piezoelectric materials find uses in applications where mechanical and electric energy must be interconverted. The mechanical displacements and movements of electrical charge tend to be of limited magnitudes in these applications.

Piezoelectrics are used in microphones and ultrasound detectors, where they convert the oscillations of a diaphragm, caused by incident pressure waves, into a varying electrical signal. When an electric current is applied to a piezoelectric crystal, it starts to vibrate and these vibrations generate sound waves with frequencies between 1.5 and 8 MHz (i.e ultrasound). A related use is in record-player pickups, where the force from the stylus varies between 0.01 and 0.05 N and the resulting output signal varies from 0.1 to 0.5 volts.

9. The number of atoms per unit cell in the F.C.C. structure is 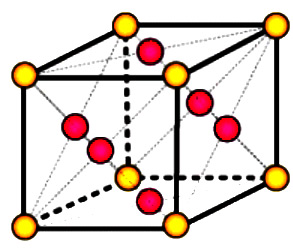 Number of atoms per unit cell

Resistivity of the conductor is given by