Ques.1. When the separation between two charges is made four times, the force between them

When the separation (R) between two charges is made four times, then the force between them is

A. is inversely proportional to the separation of wires

B. is proportional to the magnitude of each current

Force per unit length on conductor

Ques.3. If voltage applied on a capacitor is increased from V to 2V, choose the correct conclusion.

The  relation that relates the capacitance, voltage and charge of a capacitor is

Here, Q is the charge of the capacitor, C is its capacitance and V is the voltage.

Therefore, we could say the charge in a capacitor is doubled by doubling the voltage.

Hence, option C is found to be the answer.

The presence of the dielectric reduces the effective electric field.

The relative permittivity of the vacuum is 1.

Ques.5. Which of the following law states that “The total flux out of a closed surface is equal to the net charge within the surface”?

Gauss’s law states that the net flux of an electric field in a closed surface is directly proportional to the enclosed electric charge.

The net flux of a given electric field through a given surface, divided by the enclosed charge should be equal to a constant.

Gauss’s law for magnetism is one of the four of Maxwell’s equations. It states that the magnetic field B has divergence equal to zero, in other words, it is a solenoidal vector field.

It is equivalent to the statement that magnetic monopoles do not exist.

Answer.2. Same as that on the surface

Ques.7. What is the force of attraction between two electric charges of opposite polarity having 1 Coulomb each when placed at 1 m?

The force of attraction between two charges is given by

Ques.8. Two long parallel conductors are placed 10mm apart from each other carrying a current of 150 Amperes. What will be force per meter length of each one?

Force per unit length between the two conductors is

Ques.9. Which among the following statement is correct regarding an ideal conductor in a static electric field?

Answer.3. Static field intensity at the surface of conductor is directly normal to the surface

Under the static condition, the electric field inside the solid perfect conductor is zero in electrostatic equilibrium even if: 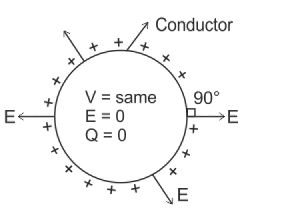 Since the surface of the solid conductor is an equipotential surface hence the electric field will be perpendicular or in other words normal to the perfectly solid conductor surface.

Since, net force on charge qC will zero.

According to coulomb’s law