Which of the following finds applications in speed control of a DC motor?

Which of the following finds applications in speed control of a DC motor?

The variable speed dc drive is the most versatile drive available. The silicon-controlled rectifiers (SCR) are almost universally used to control the speed of dc motors because of the considerable benefits that accrue from the compact static controllers supplied directly from the ac mains.

Basically, all the dc systems involving the SCR controllers are similar but with different configurations of the devices, different characteristics may be obtained from the controller. Figure. shows a dc motor driven by a full-wave rectified supply. The Armature current of the dc motor is controlled by an SCR which is in turn controlled by the pulses applied by the SCR trigger control circuit. 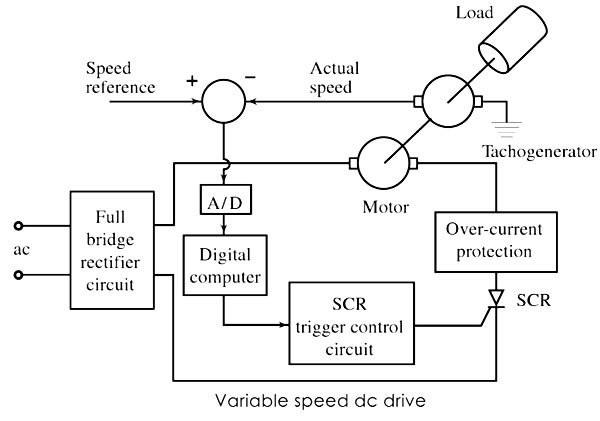 In Fig., the reference voltage which corresponds to the desired speed of the dc motor is compared with the output voltage of the tachogenerator corresponding to the actual speed of the motor. The occurrence of the error in speed causes an error signal to pass through the trigger circuit which controls the firing angle of the SCR in a direction towards an error reduction. When the processing of the error signal (calculation of the control signal) is based on the proportional control logic, a steady-state error between the actual speed and the desired speed exists. The occurrence of the steady-state error can be eliminated by generating the control signal with two components: one component proportional to the error signal, and the other proportional to the integral of the error signal.

While the SCR control system is not capable of controlling as wide a speed range as is the linear transistor amplifier, it has a high power conversion efficiency due to its switching mode and the low forward conduction voltage drop. The relative simplicity of its circuitry further adds to the positive features of the SCR control. The popularity of the SCR control for limited speed range DC motor control in the fractional and integral horsepower sizes has been largely due to these features, and to the fact that SCR’s can operate directly from the power line without AC-to-DC power conversion.

One serious problem of operating motors from SCR controls is the high form factor, which may cause serious berating of the motor. The form factor depends on the type of control used (half-wave, full-wave, three-phase), on the conduction angle, and on motor inductance; therefore, it is difficult to obtain form factor values without detailed knowledge of the application.