In a repulsion type instrument, the force of repulsion is approximately proportional to the square of the current.

What is a Comparator in Metrology ? | Types of Comparators

The fixed coil carries the current or current proportional to the voltage to be measured. On the inner surface of the coil, a specially shaped fixed iron piece is attached.  The spindle is attached to another piece of iron in the form of a fin. This is the moving iron. The current passing through the coil produces a magnetic field. In this magnetic field, both the fixed iron and the moving iron are placed. Both these iron pieces will be similarly magnetized due to the influence of the magnetic field. This will create a force of repulsion among the two pieces of iron. One piece of iron is fixed, the other piece of iron will move which will create deflecting torque. This deflecting torque has to be opposed by a control torque such that under steady deflection, 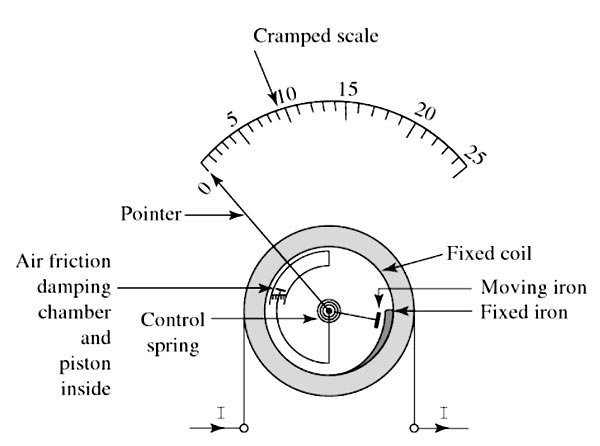 If Td is more than TC, the pointer will move. Its movement will stop when the deflecting torque, Td, equals the control torque, TC. Since the magnitude of deflecting torque depends upon the magnetism of the two pieces of iron and since this magnetism is produced by the current to be measured. we can write

And Tc ∝ θ  as more the deflection θ,  more is the controlling torque.