A freewheeling diode is connected across an inductive load is

A freewheeling diode is connected across an inductive load is

To restore conduction angle on phase

Many circuits, particularly those which are half or uncontrolled, include a diode across the load as shown in Fig. This diode is variously described as a commutating diode, flywheel diode or bypass diode. This diode is commonly described as a commutating diode as its function is to commutate or transfer load current away from the rectifier whenever the load voltage goes into a reverse state. A freewheeling diode is connected across a load in the reverse direction. The energy stored in load inductance is feedback to load through the freewheeling diode.

(i) It prevents reversal of load voltage except for small diode voltage drop.

(ii) It transfers the load current away from the maw rectifier, thereby allowing all of its thyristors to regain their blocking states.

In the case of an inductive load, as A.C voltage passes through zero after 180°, the SCR current may not reach zero and SCR may continue to conduct even when voltage wave is passing through the negative half cycle. This is due to the fact that for inductive loads current lags voltage and cannot be suddenly reduced to zero. During the negative half cycle current continues to now till the energy stored in the inductance is dissipated in the load resistance and a part of the energy is feedback to the source. As the current reaches zero, the SCR has turned off automatically and regains its blocking state. The figure shows the waveform of a half-wave rectifier with an inductive load. 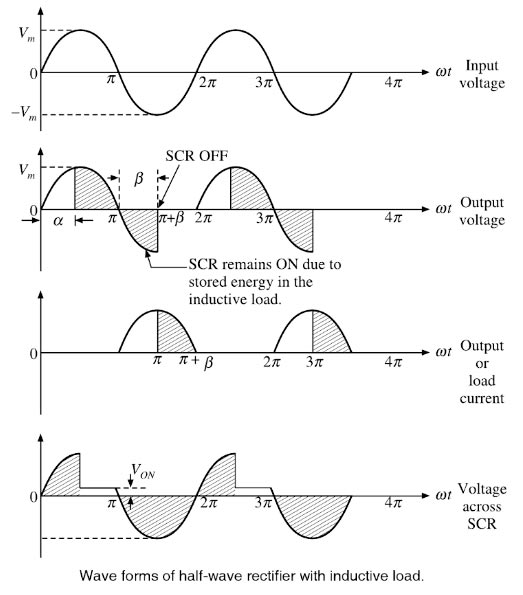 Effect of Inductive load in the bridge rectifier

The figure shows a diode D connected across a load. This diode is called the freewheeling diode. This diode prevents the conduction of SCR beyond 180°. At 180° ac voltage is zero and the voltage induced in the inductance change its polarity as di/dt changes its sign. As a result, the diode D starts conducting and stored energy in the inductance is discharged. 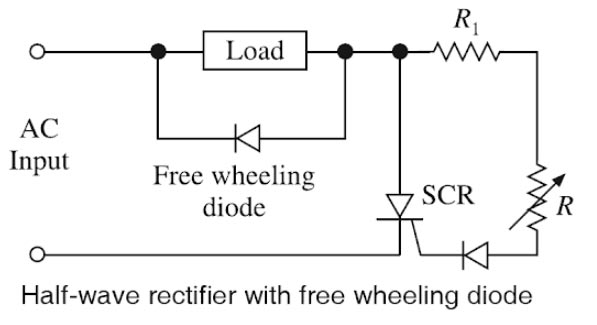