n a 1-φ full converter, Number of SCRs conducting during an overlap

n a 1-φ full converter, Number of SCRs conducting during an overlap

Commutation is a process used to switch an SCR from its conducting state to its off-state. Sometimes we assume that the commutation is instantaneous. Actually, in practice, inductance and resistance must be present in the supply source, and time is required for a current change to take place. The net result is that the current commutation is delayed, as it takes a finite time for the current to decay to zero in the outgoing thyristor, while the current will rise at the same rate in the incoming thyristor. Thus, in practice, the commutation process may occupy a quite significant period of time, during which both the “incoming” and “outgoing” thyristors are simultaneous in conduction.

In the single-phase full converter shown in Fig, Ls is the source inductance. The load current is assumed constant and ripple free. The typical current and voltage waveforms with source inductance Ls. 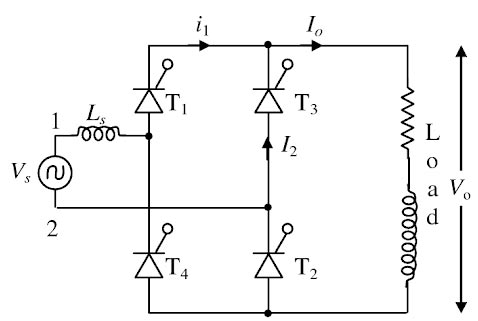 From the waveform, it is observed that during commutation all the four thyristors conduct simultaneously for a period called overlap period, the corresponding angle is referred to as an overlap angle or commutation angle. Regarding the overlap period shown in waveform following observations can be made,

(a) The output voltage is zero during this period.

Current through the outgoing pair of SCRs gradually falls to zero, forcing the current in the incoming pair to rise gradually to Io from zero value. 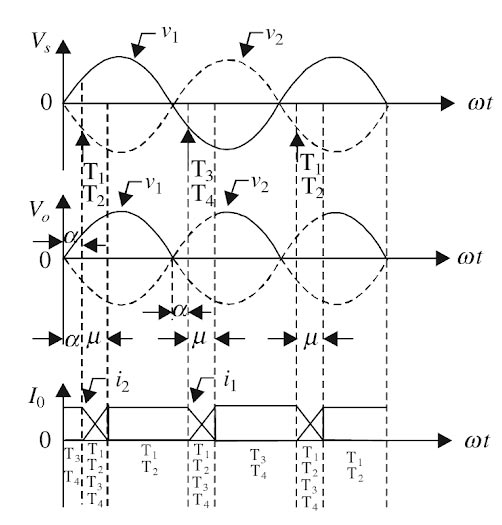