For the high-frequency choppers, the device that is preferred is

For the high-frequency choppers, the device that is preferred is

A chopper is a static power electronic device that converts the fixed dc input voltage to a variable dc output voltage. It is also known as the DC-DC converter.

Control of a d.c. motor’s speed by a chopper is required where the supply is d.c. (as from a battery) or an a.c. the voltage that has already been rectified to a d.c. voltage. The most important applications of choppers are in the speed control of d.c. motors used in industrial or Faction drives. Choppers are used for the control of d.c. motors because of a number of advantages, such as high efficiency, flexibility in control, lightweight, small size, quick response, and regeneration down to very low speeds. Chopper controlled d.c. drives have also applications in servos in battery-operated vehicles such as forklift trucks, trolleys, etc.

The choppers offer a number of advantages over controlled rectifiers for a dc. motor control in open-loop and closed-loop configurations. Because of the higher frequency of the output voltage ripple, the ripple in the motor armature current is less and the region of discontinuous conduction in the speed-torque plane is smaller. A reduction in the armature current ripple reduces the machine losses and its aerating. A reduction or elimination of the discontinuous conduction region improves speed regulation and transient response of a drive. 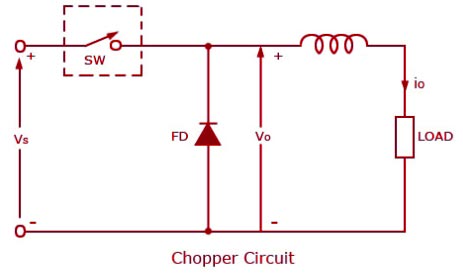 To realize a higher frequency of output voltage ripple, it is customary to use a rectifier with a higher pulse number. Use of a rectifier with a higher pulse number results in a low utility factor for thyristors and a relatively high cost. On the other hand, a chopper can be operated at comparatively high frequencies. For example, it is possible to operate a chopper at 300 Hz even with converter-grade thyristors. With inverter-grade thyristors, the frequency can be increased to 600 Hz. If the output voltage range can be lowered, corresponding frequencies can be increased to 400 Hz and 800 Hz, respectively. When power transistors are employed, frequencies can be higher than 2.5 kHz. For low power applications, power MOSFET can be used and the frequency can be higher than 200 kHz. The rectifier output voltage and current have a much lower frequency, 100 Hz in the case of a single-phase rectifier and 300 Hz in the case of a three-phase fully controlled rectifier when the a.c. source frequency is 50 Hz.

Summary:-  Where high power is involved, an SCR is used as the switch whereas, in medium and low power applications, a transistor is the most suitable.