1. The type of damping used for moving iron instruments is ______

Moving-iron instruments are generally used to measure alternating voltages and currents. In moving-iron instruments, the movable system consists of one or more pieces of specially-shaped soft iron, which are so pivoted as to be acted upon by the magnetic field produced by the current in the coil.

2. The pressure coil of a dynamometer type wattmeter is 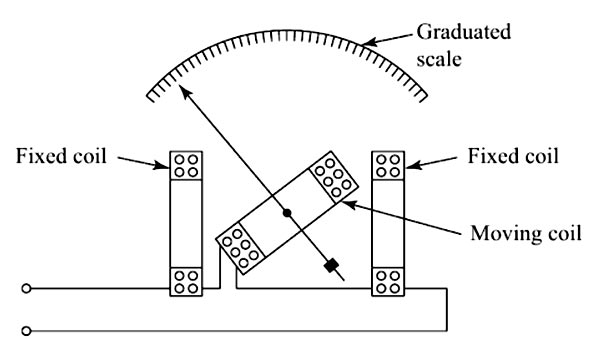 In order to measure the AC power using this meter, we have to consider two assumptions inside the meter.

3. When the pointer of an indicating instrument is in motion, then the deflecting torque is opposed by?

The essential features are possessed by an indicating instrument deflecting, controlling, and a damping device.

Deflecting device:  The deflection device produces deflecting torque which causes the moving system to move from its zero position.

Damping device: This device produces damping torque this torque is necessary to bring the pointer to rest quickly. This damping torque (Td)  is used to reduce the oscillation.

5. Which instruments can be used for DC measurement only?

6. Which of the following is NOT essential for working of an indicating instrument?

The braking torque is not essential for the working of an indicating instrument.

The essential  torques for the working of an indicating instrument are given below:

Controlling torque: It is to control the pointer to a definite value that is proportional to the quantity being measured. In absence of controlling torque, the pointer will swing beyond its final steady-state position and the deflection will be indefinite.

7. More power is required to operate a moving-iron meter than a PMMC meter because of the magnetic circuit’s high _____.

The moving-iron instrument (soft-iron instrument) uses the opposing forces on equally polarised, magnetized soft-iron vanes in the magnetic field of a coil with a measurement current. By suitably shaping the air gap the scale can cover a wide range.

If a voltmeter at internal resistance 1.2 kilo-ohms is connected across a 600-ohm resistor. Then the circuit will be 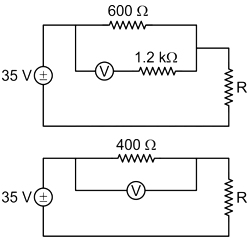 10. In the indicating instruments, the control torque produced by the spring is:

In spring control instrument, the controlling torque is given by

Hence in spring control, the scale is uniform

If a current i is given as:

12. Which of the following types of instruments is used only in DC measurements?

Electrolytic meters are exclusively DC ampere-hour meters, measuring an electric quantity directly and electric energy only indirectly, on the assumption that the pressure of the supply is constant.

Dynamometer type instrument is used for the measurement of A.C. as well as D.C. quantity. It is equally accurate on AC and DC circuits.

Shaded-pole type and induction type instruments are only used for AC measurements.

13. The damping torque in a moving coil instrument is caused by:

There are two common forms of eddy current damping devices:

2) A thin aluminum disc attached to the moving system of the instrument, this disc moves in the field of a permanent magnet; The disc should be of conducting and non-magnetic material.

14. Which of the following instruments has a uniform scale?

In spring control instrument, the controlling torque is given by

In a PMMC instrument deflecting torque is directly proportional to current.

The final steady-state deflection of the PMMC instrument is directly proportional to the current flowing through the coil.

Hence in spring control, the scale is uniform

15. The two basic forms of moving-iron type voltmeters and ammeters are:

16. Ammeter provides the path for:

17. Electro dynamometer type of instruments are enclosed in a casing made up of high permeability material to:

18. Which of the following statements is not an advantage of Electrodynamic instruments?

19. The principle of operation of hot-wire instruments is:

20. If the current through a moving iron instrument is increased by 20%, what is the percentage increase in the deflection torque?

The deflecting torque is given by

I is operating current

When the current through a moving iron instrument is increased by 20%, then deflection torque is

Hence deflection torque is increased by 44%