Which of the following is the least expensive protection for overcurrent is a low voltage system?

Which of the following is the least expensive protection for overcurrent is a low voltage system?

A fuse is a device, which protects the electrical wires, cables, and other electrical equipment against overloading and short circuit. It contains a fuse element, generally thin wire or strips mounted on an insulated base. It is heated and destroyed while passing an excessive current through it. It breaks the circuit by melting the fuse element when the current flowing in the circuit exceeds a certain predetermined value. The fuse is placed in series with the equipment or its parts which are to be protected.

They are of the following two types:

In the case of a rewirable fuse, the blown-out fuse element can be replaced by a new element. The fuse element can be either open or semi-enclosed. An open type is rarely used. Semi-enclosed type is generally used for low-voltage applications in houses and installations for up to 440 V. This is the cheapest and simplest form of protection. 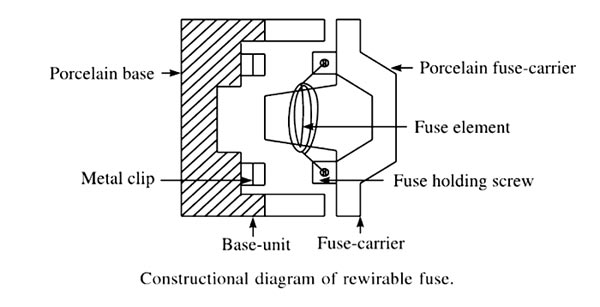