Ques.1. The strength of an electromagnet can be increased by

The strength of an electromagnet is directly proportional to

Also, the use of a core material of high permeability will increase an electromagnet’s strength.

Ques.2. What is the magneto-motive force (MMF) of a wire with 8 turns carrying three amperes of current?

Ques.3. What is the magneto-motive force in a 75-turn coil of wire when there are 4 A of current through it?

Ques.4. Which of the following is a vector quantity?

Scalar Quantity:-  The scalar is a quantity whose value may be represented by a single real number, which may be positive or negative. The direction is not at all required in describing a scalar. Thus, A scalar is a quantity which is wholly characterized by its magnitude. The various examples of scalar quantity are temperature, mass, volume, density, speed, Relative permeability, Flux density, Magnetic potential, electric charge etc.

Vector Quantity:- A quantity that has both, a magnitude and a specific direction in space is called a vector.

The magnetic field intensity is a vector quantity H with units of amperes/meter. Its direction is around the conductor. Its magnitude is given by:

Ques.5. The magnetism of a magnet can be destroyed by

Answer.4. By all the above methods

Demagnetization by Heating and Hammering:- Other methods of demagnetization include heating and hammering. If a magnet is hammered vigorously while lying in an east-west direction, its magnetism will become weaker or even disappear. The magnetism of a magnet may also be destroyed if the magnet is heated to red-hot and then allowed to cool while lying in an east-west direction.

Ques.6. One maxwell is equal to

The Maxwell is the CGS unit of magnetic flux.

Ques.7. What will be the magnetic potential difference across the air gap of 2 cm length in the magnetic field of 200 AT/m?

Ques.8. A magnetic field exists around

Ques.9. Temporary magnets are used in

Electromagnets are temporary and are used where one wants to be able to vary the strength of the magnetic field (by varying the current) and switch it on and off. As well as being used in cranes to lift iron objects, scrap iron, etc.  Electromagnets are an essential part of many electrical devices such as an electric bell, magnetic locks, relays, and practical motors and generators.

Que.10. When an iron piece is placed in a magnetic field

Answer.2. The magnetic lines of force will bend away from their usual paths in order to pass through the piece

Because all materials have some ability to conduct magnetic lines of force, it is not practical to make a magnetic insulator. Strong magnets placed near electrical instruments can cause permanent damage. Therefore, it is necessary to prevent the magnetic flux (lines of force) from passing through the instrument. Magnetic flux can be bent, distorted, and guided by low-reluctance materials inserted in the magnetic field. 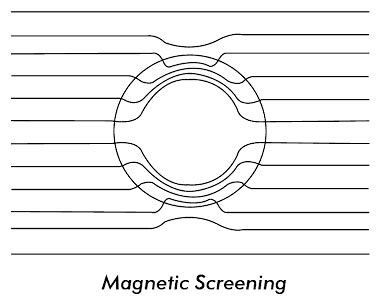 The external field of a magnet is distorted when any magnetic substance is placed in that field because it is easier for the lines of force to travel through the magnetic substance than through the air. The opposition of a material to magnetic flux is called reluctance and compares to resistance in an electric circuit. When a piece of soft iron is placed near a magnet, the field is distorted and the lines tend to pass through the iron instead of the air leaving the field weaker elsewhere. The effect of an iron ring or of a cylinder placed in a magnetic field is shown in Figure.  Iron is a better conductor of magnetism than air. This fact is utilized in constructing magnetic shields. Many expensive instruments that may be subjected to magnetic influences are surrounded by iron or iron alloys. The iron provides a magnetic path around the sensitive parts. There is little tendency for the flux lines to leave the iron and pass through an air medium and to return again to the same iron path.