Ques.11. The deflecting torque in an instrument may be produced

Answer.4. Any of the above

Basically, there are three types of Force or torque act upon the Measuring Instrument

Ques.12. To take care of change in frequency of the A.C current, while using a moving iron type instrument

Answer.3. A condenser of suitable value is used in parallel with the swamp resistance

Error due to changes in frequency: In certain type of instruments, like in moving iron instruments, the change in frequency causes error due to the change in magnitude of eddy currents setup in the metal portion of the instruments. Changes in frequency cause changes in reactance of the operating coil (X = 2πf ).  At high frequencies, the meter will give a reading lower than the actual value and vice-versa. This type of error can be eliminated only if the impedance of the coil is independent of the frequency. This is achieved by having a capacitance in shunt with the swamping resistance of the coil as shown in Fig. 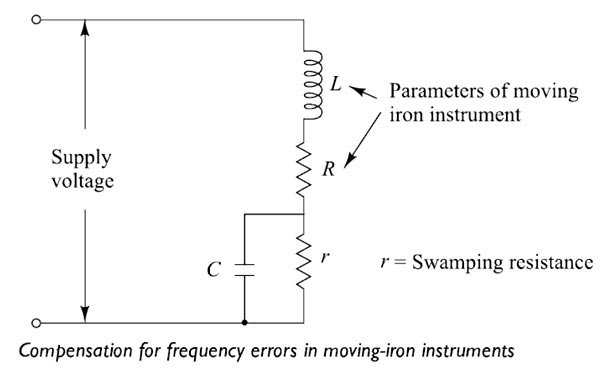 As shown in Fig. let R and L be the resistance and inductance of the coil of the moving-iron instrument and let r(R>>r) be the swamping resistance connected in series to eliminate the temperature errors. Let C be the values of the capacitance to be shunt-connected so that the impedance remains unaltered. Then, the total impedance Z which remains independent of the frequency is given as 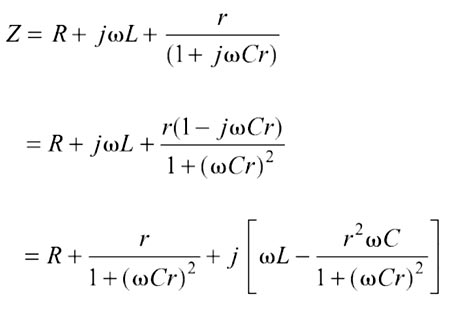 If Z is to be independent of the frequency, then it must not contain any j terms or the j terms should be equal to zero.i.e

The permanent magnet moving coil (PMMC)-type instrument is the basic dc measuring instrument. In the instruments, a permanent magnet, generally of horseshoe type, creates a magnetic field in which a coil of fine wire of the number of turns is placed. The coil is wound on a very light aluminum drum and is pivots on jewel bearings so that the coil is free to move when current flows through it. The current carrying coil placed in the magnetic field experiences a torque and tries to turn. its free turning is restricted by spring tension attached to its shaft. The moving coil produces a defecting torque which is opposed by the control torque produced by the spring action. A simplified diagram of a PMMC type instrument is shown in the figure. 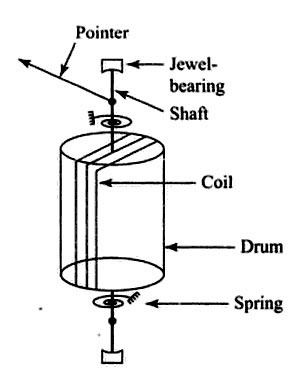 Ques.14. A moving coil milliammeter having a resistance of 10 ohms gives full-scale deflection when a current of 5 mA is passed through it. If the instrument is to be used to measure current upto 1 A.

The resistance of milliammeter Rm = 10 ohms

To measure current upto 1 A. The Resistance of the shunt Rs

Ques.15. A PMMC type voltmeter, having a full-scale reading of 250 V and an internal resistance of 400 kilo-ohms, is connected with the series resistance of 100 kilo-ohms. Calculate the sensitivity of the voltmeter (in Ohms/Volts).

Now as per the given question 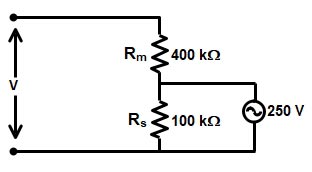 Ques.16. In eddy-current damping systems, the disc is usually made of

This is the most effective way of providing damping. It is based on the Faraday’s law and Lenz’s law. When a conductor moves in a magnetic field cutting the flux, e,m.f. got induced in it. And the direction of this e.m.f. is such as to oppose the cause producing it. 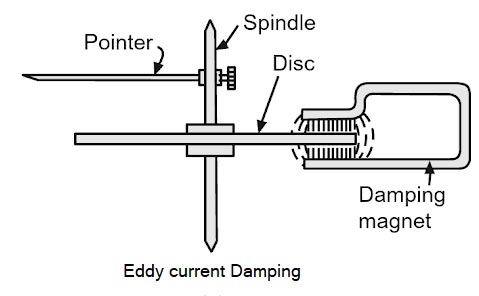 Ques.17. Which of the following types of instrument can be used for D.C only?

Ques.18. Which type of wattmeter cannot be used for both A.C and D.C?

Answer.2. None of the above

Electrostatic type instrument does not come in the category of the wattmeter and it is used for voltage measurement.

Ques.19. A moving iron type ammeter has few turns of thick wire so that

Moving iron instruments are of two types: attraction type and repulsion type. In both types, the principle of operation is the force experienced by an iron piece in the presence of a magnetic field. The necessary magnetic field is produced by the ampere-turns of a current-carrying coil. When used as an ammeter the coil has fewer turns of thick wire so that the ammeter has low resistance.

When used as a voltmeter, the coil has the high impedance so as to draw a small current as possible since it is connected in parallel. Since the current through it would be small, it has to have a large number of turns to produce the necessary ampere-turns.

Ques.20. Which of the following types of instrument can’t be used fo D.C

Induction type instrument can be used for A.C only