A motor takes a large current at starting because

A motor takes a large current at starting because

The Voltage equation of DC Motor is given by

V is the supply voltage,

Ia is the armature current,

Ra is the armature resistance.

And the back emf is given by Eb.

Now the back emf, in case of a DC motor, is very similar to the generated emf of a DC generator as it’s produced by the rotational motion of the current carrying armature conductor in presence of the field. This back emf of DC motor is given by

P – Number of poles of the machine

ϕ – Flux per pole in Weber.

N – Speed of armature in revolution per minute (r.p.m).

A – Number of parallel paths in the armature winding.

From this equation, we can see that Eb is directly proportional to the speed N of the motor. Now since at starting N = 0, Eb is also zero, and under this condition, the voltage equation is modified to 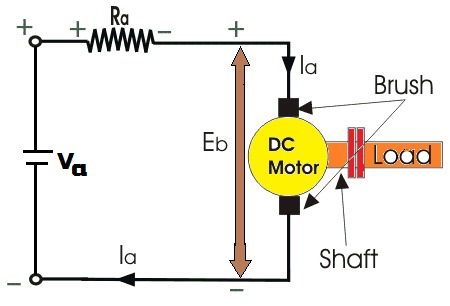 For all practical practices to obtain optimum operation of the motor the armature resistance is kept very small usually in the order of 0.5 Ω − 0.10Ω and the bare minimum supply voltage being 240 volts.