1. Potential difference in electrical terminology is also known as _______

Energy is required to move a charge from one point to another. Potential difference in electrical terminology is known as voltage, and is denoted by either V or v. Voltage is expressed in terms of energy (W) per unit charge (Q), i.e.

2.  If the voltage-current characteristics is a straight line through the origin, then the element is said to be?

Linear circuit: The circuit whose parameters are constant, that is, they do not change with the application of voltage or current is called a linear circuit.

If the resistance, inductance or capacitance offered by an element does change linearly with the change in applied voltage or circuit current, the element is termed as linear element. The voltage-current characteristics is a straight line through the origin. Such an element shows a linear relation between voltage and current as shown in Fig.

Ordinary resistors, capacitors and inductors are examples of linear elements. 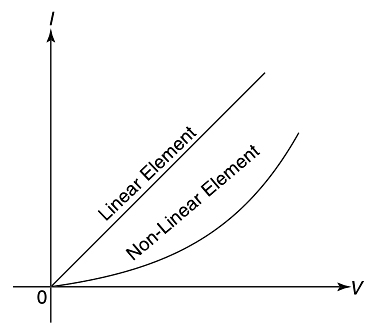 3. If the current does not change linearly with the change in applied voltage then it is called as

4. The circuit in which current has a complete path to flow is called ______ circuit. 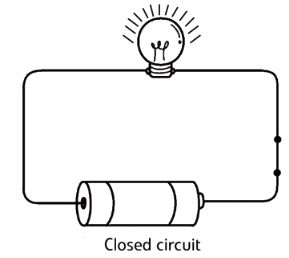 5. How many types of dependent or controlled sources are there?

6. If a circuit does not provide complete path for a current flow then it is called as

Electric current cannot flow if a circuit is open. An open circuit does not provide a complete path for current flow. If the circuit became open, no current would flow. The light bulb would not glow. Free electrons of the conductor would no longer move from one atom to another. An example of an open circuit occurs when a light bulb burns out. The filament (the part that produces light) opens. 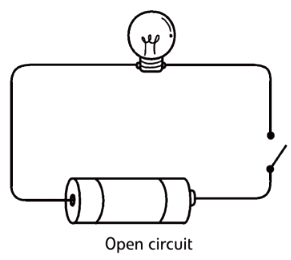 The opening in the filament stops current flow from the source of electric energy. This causes the bulb to stop burning, or producing light.

7. A circuit having an emf source or any energy source is a/an

An element which is a source of electrical signal or which is capable of increasing the level of signal energy is termed as active element. Batteries, BJTs, FETs or OP-AMPs are treated as active elements because these can be used for the amplifi cation or generation of signals.

8. In a linear circuit, when the ac input is doubled, the ac output becomes

If the circuit is linear, and you have a single independent voltage source, doubling the voltage source i.e A.C input will double the current and quadruple the power.

9. The elements which are not capable of delivering energy by their own are known as

Resistors, inductors and capacitors may be linear or non-linear, while diodes and transistors are always non-linear.

10. In _______ system the same relationship exist between current and voltage for current flowing in either direction.

Consider another example of a resistor. When the voltage is applied, current starts to flow. If we change the polarity of the applied voltage, the direction of the current is changed but its magnitude is not affected. Such an element is called a bilateral element.

Statement 1:- In unilateral circuit characteristics change with the direction of the operation.

Statement 2:- Transistor and Diode are example of unilateral system

Answer.1. Both the statement is correct

A unilateral circuit is one whose properties or characteristics change with the direction of the operation.

If the magnitude of current flowing through a circuit element is affected when the polarity of the applied voltage is changed, the element is termed unilateral element.

12. The v−i characteristic of an element is shown in Fig. The element is 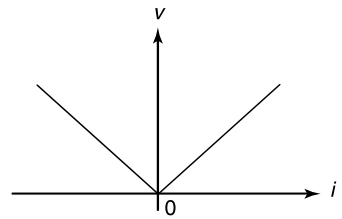 The graph between current and. voltage characteristic is a straight line hence it is linear system.

Since emf source is present to deliver energy therfore it is an active circuit.

From the graph it is clear that when the polarity change the direction of the element is in opposite direction therfore it is a non-bilateral element.

The voltage will increase four times as compared to current hence the graph will be Non-Linear.

If we change the polarity of the applied voltage, the direction of the current is changed but its magnitude is not affected. Such an element is called a bilateral element.

Hence for the above equation the v−i characteristic of a resistor is Non-linear, passive, bilateral.

14. Which of the following is true about Lumped Element?

Answer.2. They can be sepreated Physically

A lumped element is the element which is separated physically, like resistors, inductors and capacitors. parameters. These elements will be connected together by wires (leads) having practically zero resistance, then the network with number of lumped elements and a set of connecting leads, is called a lumped-parameter network. In such a circuit KVL and KCL holds good.

15. Which of the following is not true about Distributed system?

Answer.3. Element can be physically seperated

A network is said to be distributed if the network elements (R, L, C) cannot be electrically separated and individually isolated as separate eclements. Examples: Transmission lines, winding, of transformers and generators. If the length of transmission line increases or decreases, value of effective (R, L, C) changes and cannot be separated physically.