Ques 12. Gauss-Seidel iterative method can be used for solving a set of

Answer.2. The linear algebraic equation only

The advantages of Gauss-Seidel method are:-

Ques 13. The pure inductive circuit takes power (reactive) from the a.c. line when

Ques 13. A square matrix is called singular if its

Ques 14. In load flow analysis, the load connected to a bus is represented as

Answer.3. Constant current is drawn from the bus

Ques 15. If transformer frequency is changed from 50 Hz to 60 Hz the ratio of eddy current loss 50 Hz to 60 Hz, at constant voltage will be

Ques16. When a d.c source is switched is purely inductive, the current response is

The power loss in the line is given as
PL =IL2R 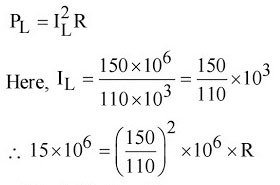 Ques 18. At a particular unbalanced node, the real powers specified are
leaving the node 20 MW, 25 MW
entering the node 60 MW, 30 MW
then the balanced power will be

Answer.2. Improve the stability of the system

The series capacitive compensation decrease the overall effective series transmission impedance from the sending end to the receiving end. Hence it increases the power system stability.

Synchronising power Psyn is given as

The advantages of series compensation are

1 thought on “50 Important mcq of Power System with Explanation”