Resistance grounding is used for voltage between

Resistance grounding is used for voltage between

A grounded system is defined as a system of conductors in which at least one conductor, usually the system neutral, is intentionally grounded, either solidly or through a resistor or other current-limiting device. Both solid and resistance grounding can limit transient overvoltage to a safe level (250% of normal voltage); therefore, other system parameters determine the choice.

The various methods of grounding the neutral of the system are:

When it becomes necessary to limit the high earth-fault current, a current-limiting device is introduced between neutral and earth. As shown in Fig, a pure resistance is introduced in the neutral and the earth as the current-limiting device. The value of the resistance commonly used is quite high as compared with the system reactance. The resistor may comprise of a metallic resistance unit or a liquid resistor. It is more usual to use liquid resistors if the voltage is 6.6 kV or more.

With the increase in operating voltage, the value of resistance required for grounding also increases to limit the short-circuit current during line-to-ground faults. Resistance grounding reduces the arcing-ground hazards and permits ready relaying of ground faults. This system can be operated for obtaining voltage characteristics similar to that of the isolated, earthed system. 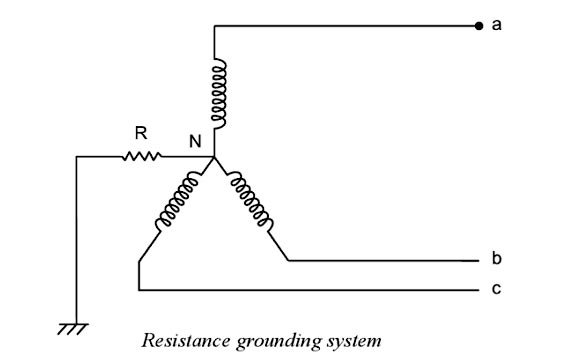 This type of resistance earthing is commonly employed for the system operating at voltages between 2.2 kV and 33 kV and the power source capacity exceeds 5,000 kVA.

The advantages of resistance grounding: