Ques.21. The short-circuit test in the transformer is used to determine:-

Answer.2. The copper loss at any load or at full load

In case of short-circuit test, all the test instruments are connected on the high-voltage side and the low-voltage side is short-circuited. Now, the voltage across the HV side is gradually increased from a very low value. Since the transformer is short-circuited, the rated full-load current will appear at a much lower voltage. Low voltage (5 to 10%) is applied to the primary and slowly increase till full load current are flowing both in primary and secondary. Over and above, the rated full-load current on the high-voltage side is lower than that on the low-voltage side. So, the lower-rated instruments on the primary side can serve the purpose of testing.

Now at a low voltage, the exciting current will be much lower. So the effect of iron loss in this test can be neglected. Hence the wattmeter reads the copper loss in the transformer. 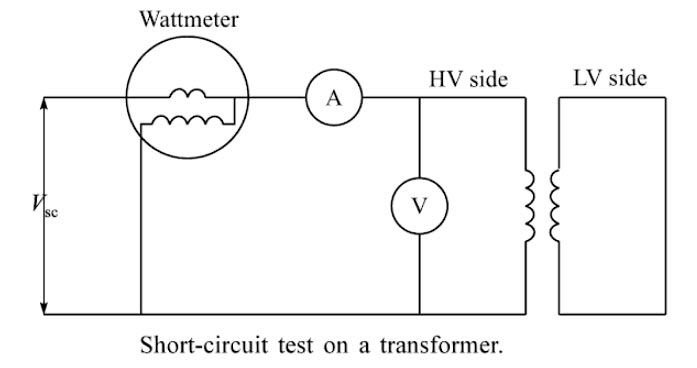 Power diode is a two-terminal semiconductor device with a relatively large single P-N junction. It consists of a two-layer silicon wafer attached to a substantial copper base. The base acts as a heat-sink, support for the enclosure and also one of the electrical terminals of the diode. The other surface of the wafer is connected to the other electrical terminal. The enclosure seals the silicon wafer from the atmosphere and provides adequate insulation between the two terminals of the diode. The two terminals of a diode are called the anode (A) and the cathode (K).

A power diode is more complicated in structure and operating characteristics than low power diode Usually, power diodes have high-forward-current carrying capability and high reverse breakdown voltage. The area of the PN junction in a power diode is very high compared to low power signal diodes. Therefore, the structural modification of a low-power signs diode is required to make them suitable for high power applications.

Ques.23. In industries which electrical braking is preferred?

Dynamic braking:-The supply to the field winding is maintained, but the armature is disconnected from the supply voltage and reconnected to an external resistor. The machine now acts as a generator, converting kinetic energy stored in its moving parts to electrical energy, which is dissipated as heat in the resistor. This method of braking is called the dynamic rheostatic braking.

These three types of braking techniques preferred to stop a DC motor and used widely in industrial applications.

Ques.24. The steady-state stability of the power system can be increased by

If the power has to be transferred through long-distance transmission lines, the use of parallel lines reduce transfer reactance as well as improve voltage regulations. Similarly, series capacitors are some times employed in lines to get the same features.

Ques.25. An AC servomotor operated on the principle of operation of

The servomotor is also called a control motor. These motors are used in the feedback control system as output actuators unlike large industrial motors, they are not used for continuous energy conversion. The basic principle of operation of the motor is the same as that of other electromagnetic motors. The rating of the motor varies from a fraction of watt to a few hundred watts.

Servomotors are of two types

Most of the servomotors used in the low power servomechanism are A.C. servomotors. The a.c servomotor is two-phase two phase induction motor. The output power of a.c. servomotor varies from fraction of watts to few hundred of watts. The operating frequency is 50 Hz to 400 Hz.

Construction: The two phase a.c. the servomotor is basically consist of two parts: 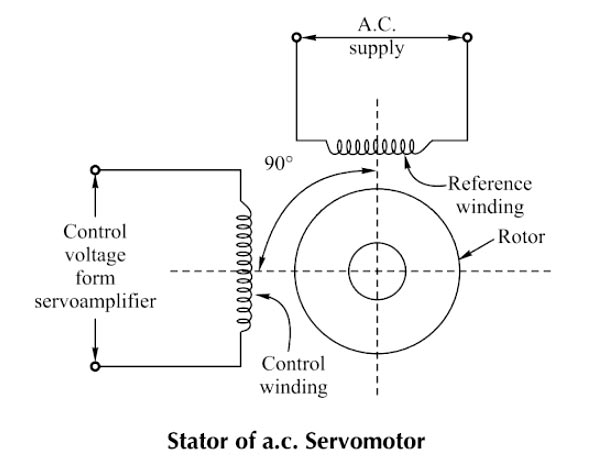 The other winding is called as control winding. It is excited by the variable control voltage, which is obtained from a servo amplifier. The windings are 90° away from each other and the control voltage is 90° out of phase with respect to the voltage applied to the reference winding. This is necessary to obtain a rotating magnetic field.

Rotor: The rotor is generally of two types. The two types of rotors are:

This has a small diameter and large length This is because to reduce inertia. Aluminum conductors are used to keep weight small Its resistance is high to keep torque-speed characteristics as linear as possible. Ai gap is kept very small which reduces the magnetizing current.

These are wound for as many numbers of poles as possible so that the operating speed of the motor is very low. Such a construction is used in very low power applications.

Ques.26. The number of unpaired electron in the chromium atom is

The atomic number of chromium is 24 and the number of unpaired electron in the chromium atom is six.

Ques.27. A transformer has 1000 primary turns. It is connected to 250 V A.C supply. Find the mumber of secondary turns to get secondary voltage of 400 volts.

According to the transformer Ratio

Ques.28. Calculate the total resistance between point A and B

The resistance R1 and R2 are in parallel therefore

Now resistance R and R3 are in series hence

Ques.29. If 4V is supplied to a 5F capacitor. Find the charge stored in the capacitor.

Charge stored in the capacitor

Ques.30. What happens to the effective inductance when a ferromagnetic core is introduced?

An inductor is usually made from a coil of conductive wire wrapped around a core material. The core performs two functions:

(1) it stabilizes the wire and provides support around which to wind the wire
(2) it increases the inductance, depending on the type of core material.

One type of core is an air core which consists of a cylinder of cardboard, wood, or ceramic that may be hollow. Basically, it is a form for winding the wire and does not affect the value of inductance. Another type of core is made of a ferromagnetic material such as iron, nickel, or iron ferrite. This type of core material concentrates the magnetic field and increases the inductance of the inductor.

Inductance is a function of the number of wire turns, length of the coil, the cross-sectional area of the coil, and permeability of the core material. The inductance of a cylindrical inductor can be calculated by the proportion

L is inductance (Henrys)
µ is core permeability (Henrys per meter)
A is a cross-sectional area (square meters)
L is the length of the core (meters)
N is the number of turns of wire. 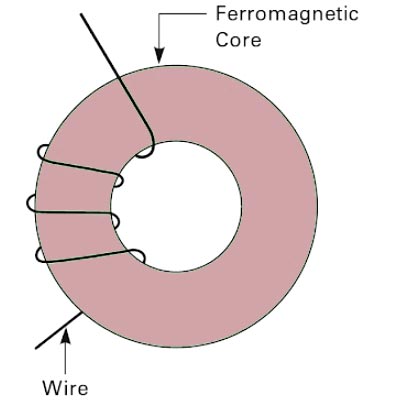