In series type ohmmeter, the full-scale deflection current indicator is marked as zero. 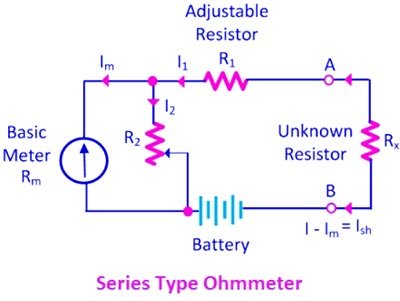 A series type ohmmeter consists of a deflecting meter in series with a resistance R1 and a battery which is connected to the terminals A-B, across wh the unknown resistance is connected.

The current flowing through the meter depends on the magnitude of the unknown resistance. Thus the meter deflection is proportional to the value of He resistance. Hence Be meter scale should be calibrated accurately.

When the unknown resistor Rx = 0 (terminals A and B shorted), maximum current flows in the circuit. Under this condition, the shunt resistor R2, is adjusted until the movement indicates full-scale current (Ifsd). The full-scale current position of the pointer is marked ‘0Ω” on the scale.

Similarly, when RX = 0 (terminals A and B open), the current in the circuit drops to zero and the movement indicates zero current, which is then marked “∞” on the scale.

By connecting different known resistances across the terminals A-B, intermediate markings can be done.

As current is inversely proportional to the resistance, the scale is marked from ∞ to 0, rather than 0 to ∞. This is shown in Fig. 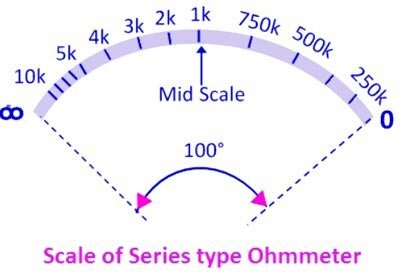