Ques 1. Two 10 ohm resistance is connected in parallel, their effective resistance will be (SSC-2017)

Since the resistance are connected in parallel, therefore, their effective resistance will be

The efficiency of a cell can be considered in two ways:

Ques.3. Superposition theorem is based on the concept of the opposite of which is (SSC-2017)

Superposition theorem is based on circuit linearity property and the opposite of Linearity is Non-Linearity.

James Chadwick discovered the neutron in 1932.

by
Ques.5. The phase difference between voltage and current wave through a circuit element is given as 30. The essential condition is that (SSC-2017)

Answer.1. Both waves must have the same frequency

Consider the given circuit 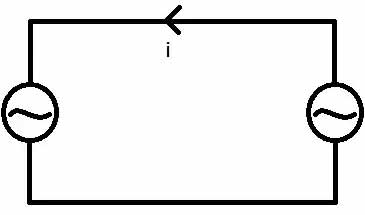 Hence if both waves have the same frequency than the phase difference between voltage and the current wave is 30°.

Ques.6. In the series resonant circuit, the impedance of the circuit is (SSC-2017)

At a particular frequency (resonant frequency), we find that X1=X2 because the resonance of a series RLC circuit occurs when the inductive and capacitive reactances are equal in magnitude but cancel each other because they are 180 degrees apart in phase.

Ques.7. In R-L-C series resonant circuit magnitude of resonance frequency can be changed by changing the value of (SSC-2017)

Explanation:
An electric circuit generally consists of circuit elements like resistance, inductance, and capacitance. The voltage and frequency are generally constant at the supply terminal. However, in electronic communication circuits, the supply voltage may have a variable frequency. When the frequency is variable, the inductive and capacitive reactance of the circuit element will change. (XL = 2.π.f.L and XC = 1 ⁄ 2.π.f.C)

Ques.8. If the length of the material remains the same while the diameter of material becomes half, what will be the new resistance (SSC-2017)

Where p is the resistivity of the material

A is a cross-section area

The unit of measurement for the inductance of an inductor is the henry, which is equal to 1 volt-second per ampere.

The voltage across an inductor is proportional to the rate of change of current (measured in amps/second) through it. The larger the inductance, the larger the voltage across the inductor for the same rate of change of current. If the current is flowing left to right through an inductor and increasing (respectively decreasing) with time, then the potential on the left side of the inductor is higher (respectively lower) than the potential on the right side.