Ques.11. Which of the following statement is CORRECT?

Although the Thevenin’s theorem and Norton’s theorem can be used to solve a given network, yet the circuit approach differs in the following respects:

Ques.12. The algebraic sum of the electric currents meeting at the common point is_________

Kirchhoff’s Current Law (KCI ) or Kirchhoff’s Junction Rule. This law is based on the conservation of charge and may be stated as under:

The algebraic sum of the currents meeting at a junction in an electrical circuit is zero.

An algebraic sum is one in which the sign of the quantity is taken into account. For example, consider four conductors carrying currents I1, I2, I3, & I4 and meeting at point O as shown in Fig 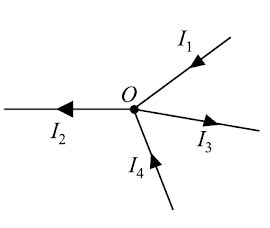 If we take the signs of currents flowing towards point O as positive, then currents flowing away from point O will be assigned negative sign. Thus, applying Kirchhoff’s current law to the junction O we have,

Therefore, Kirchhoff’s current law may also be stated as under:

Ques.13. Which of the following law is based on the conservation of energy?

Kirchhoff’s Voltage Law (KVL,) or Kirchhoff’s Loop Rule. This law is based on the conservation of energy and may be stated as under:

The validity of Kirchhoff’s voltage law can be easily established by referring to the loop ABCDA shown in Fig. 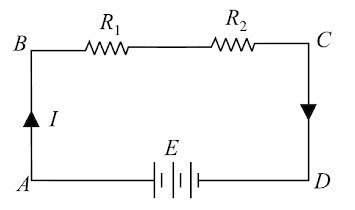 If we start from any point (say point A) in this closed circuit and go back to this point (i.e., point A) after going around the circuit, then there is no increase or decrease in potential. This means that algebraic sum of the e.m.f.s of all the sources (here only one e.m.f. source is considered) met on the way plus the algebraic sum of the voltage drops in the resistances must be zero. Kirchhoff’s voltage law is based on the law of conservation of energy, i.e., the net change in the energy of a charge alter completing the closed path is zero.

Ques.14. What is the value of current (in A) for the given junction? 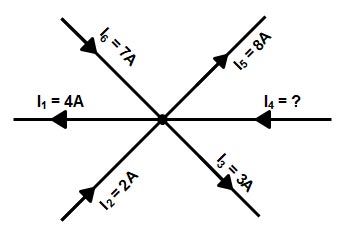 From the above Diagram

Current Flowing towards the Point: I2, I6, I4

Current Flowing Away from the Point: I1, I3, I5

Putting the value of the current

Ques.15. What is the value of Norton resistance (in Ω) between the terminal A and B for the given Norton’s equivalent circuit?

Norton equivalent resistance for the given network is

Ques.16. Determine the value of current (in A) through both the resistor of the given circuit. 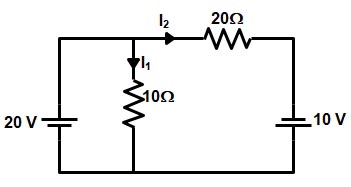 Current through the 10Ω resistance

Now current through the 20Ω resistance

Ques.17. Determine the value of current I1 (in A) and V1 (in V) respectively, for the given circuit below.

Ques.18. What will be the value of Thevenin’s voltage (in V). The Thevenin’s resistance (in Ω) and the load current (in A) respectively, across the load resistor in the given electrical circuit?

As per Thevenin theorem, when resistance RL is connected across terminals A and B, the network behaves as a source of voltage ETh and internal resistance RT and this is called Thevenin equivalent circuit. 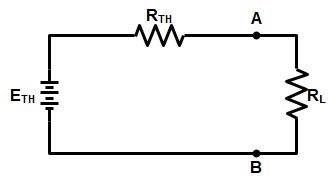 The Thevenin voltage used in Thevenin’s Theorem is an ideal voltage source equal to the open circuit voltage at the terminals.

In the given question, the resistance 10Ω does not affect this voltage and the resistances 30Ω and 20Ω form a voltage divider, giving

Thevenin’s resistance can be found by replacing 100 V source with a short-circuit.

Thevenin equivalent resistance for the given network is

The Load current Is calculated as

Hence the value of Thevenin voltage, Thevenin Resistance, and Load current is (60 V, 22Ω, 2.22A) respectively.

Ques.19. Determine the value of maximum power (in W) transferred from the source to the load in the circuit given below

Step-1: Converting the current source into the equivalent voltage source 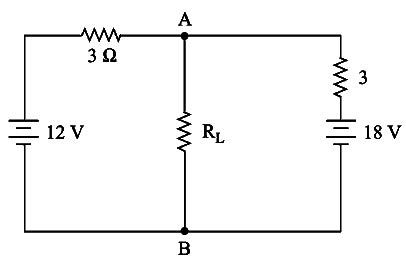 Step:2 Open circuit voltage terminal across A and B is calculated as 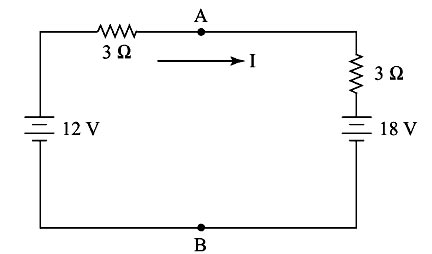 Applying Kirchoff’s Voltage Law in the given circuit

The voltage across terminal A & B is 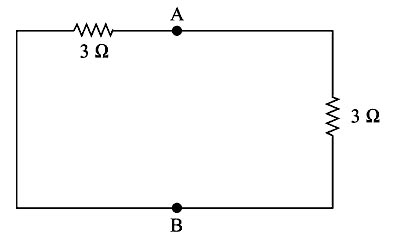 Thevenin equivalent circuit across RL is 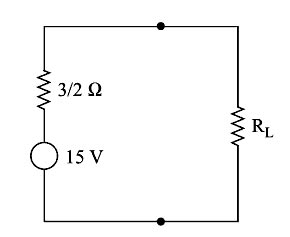 Ques.20. Determine the Norton’s current (in A) and Norton’s resistance (in ohms) respectively, for the given electrical circuit across the load resistance RL.

Determine the resistance RN of the network as seen from the network terminals. (Its value is the same as that of Rth).

The value I for the current used in Norton’s Theorem is found by determining the open circuit voltage at the terminals AB and dividing it by the Norton resistance r. 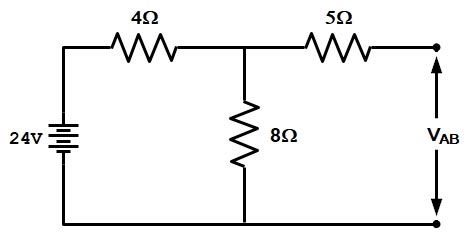 According to voltage Division Rule

Now Norton Current IN is