Ques.51. The brush contact losses in a d.c. machine is 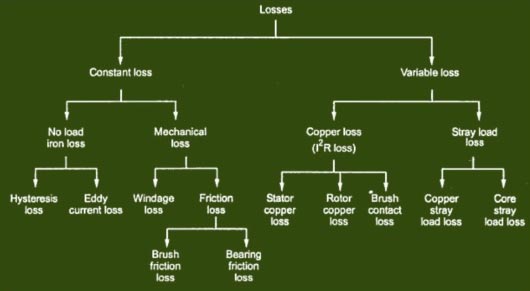 Loss due to Brush Contact Resistance:- Brushes are placed on the commutator surface to supply or collect current to the armature coils through the commutator segments. In dc machines, brushes make a sliding contact with the commutator and the conduction of current is through minute arcs. Hence, a loss occurs at the brush contacts. The contact voltage drop for a particular grade of the brush is more or less a constant, varying from 1 to 2 V for normal carbon brushes. The brush contact loss is equal to the product of the contact voltage drop and the armature current. Thus brush contact loss is directly proportional to the armature current. Strictly speaking, it is not a copper loss, however, it is normally included in the classification of copper losses.

Ques.52. In which transformer, the tertiary winding is used 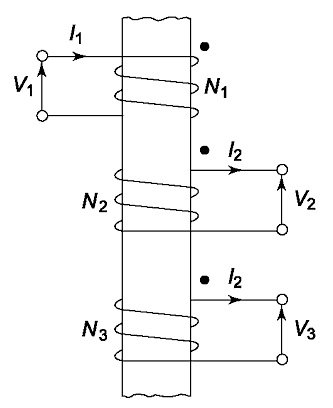 Stabilization Due to Tertiary Winding

Ques.53. The secondary winding of an auto-transformer is also called

Normal transformers have two winding placed on two different sides i.e. primary and secondary. In Auto Transformer, one single winding is used as primary winding as well as secondary winding i.e primary and secondary shares the common single winding. The primary is electrically connected to the secondary, as well as magnetically coupled to it. Auto transformers are often used to step up or step down voltages up to 240 V range. 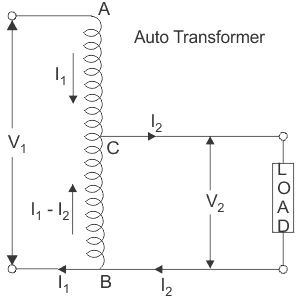 Ques.54. The maximum allowable voltage between adjacent segment is

So the effect of the armature flux on the main flux affecting its value and the distribution called armature reaction.

For machines subjected to heavy overloads, rapidly changing loads, or operation with a weak main field, there is the possibility of trouble other than simply sparking at the brushes.

The armature reaction causes the flux density wave to be so badly distorted that when a coil is passing through the region of peak flux densities, the emf induced in it far exceeds the average coil voltage. If this emf is higher than the breakdown voltage across adjacent segments, a sparkover could result which can easily spread over and envelop the whole commutator as the environment near the commutator is always somewhat ionized and conditions are favorable for flashover. The result is the complete short circuit of the armature. The maximum allowable voltage between adjacent segments is 30 – 40 V. The choice of the average coil voltage determines the minimum number of commutator segments for its design.

Compensating winding in addition to interpoles reduces the armature reaction.

Ques.55. The field control of a DC shunt motor gives 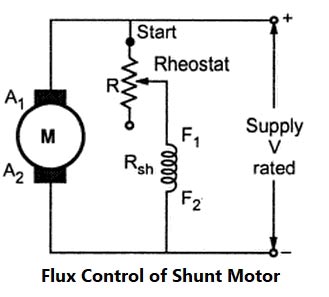 The speed of DC Shunt Motor is inversely proportional to the flux and the flux is directly proportional to the Torque. The flux is dependent on the current through the shunt ﬁeld winding. Thus flux can be controlled by adding a rheostat (variable resistance) in series with the shunt ﬁeld winding. At Starting the rheostat R is kept at the minimum. The supply voltage is at its rated value. So the current through shunt field winding is also at its rated value. Hence the speed is also rated speed i.e at normal speed. When the resistance R is increased due to which shunt ﬁeld current Ish decreases, hence decreasing the ﬂux produced. As N =(I/Φ), the speed of the motor increases beyond its rated value. Now as we know that the speed of DC motor is directly proportional to the flux hence when the speed is increased the back EMF also increased. Thus by this method, the speed control above the rated value is possible.

Field Control F is controlled by tapping series field turns or by a diverter resistance across the
series field. 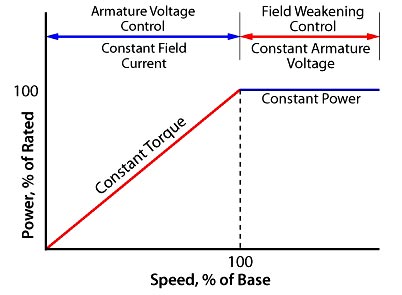 The highest speed achieved in this method is limited by the following reasons:

1. The increase in armature current causes overheating of the armature.

2. Due to high speed, centrifugal stresses are set up in the armature.

3. Because of an increase in the armature current, the increased armature reaction, under the field condition, gives rise to instability of motor at high speed, coupled with poorer commutation.

Ques.56. The no-load current in a transformer is

When the ac power source is connected to a transformer, a current flows in the primary winding, even when the secondary winding is open-circuited. This is the current required to produce the flux in the ferromagnetic core. The no-load current lc, taken by the primary consists of two components:

A reactive or magnetizing component, “Im“ responsible for producing flux in the core

If the frequency of supply φ and the number of turns N are constant then induced emf E is proportional to flux φ. Now flux φ is produced by the magnetizing current Im (a component of the no-load current). The curve giving the relation between B and Im for a magnetic material is known as the magnetizing characteristic.

When a transformer primary winding is supplied with a sinusoidal alternating voltage with the secondary open-circuited, the current flowing through the primary winding produces an alternating magnetic field which in turn induces an emf in this winding approximately equal and opposite to that of the applied voltage. For this emf to be sinusoidal, the flux must vary sinusoidally with time The magnetic flux is produced by the magnetizing current flowing through the primary. The curve showing the relation between magnetic flux and magnetizing current is called magnetizing characteristics.

Ques.57. Transformer cooling and insulation oil must be of

Transformer oil is used in the oil filled transformer and in some other system such as high voltage capacitors, fluorescent lamp ballasts, circuit breaker etc.

Transformers generate a lot of heat in dropping high voltage to low voltage. The heat has to be removed or the copper will melt and electrical contact will be lost.

Transformer Oil has a very good heat transfer coefficient (removes heat easily), does not conduct electricity at all (so electrical shorts won’t occur), and is selected to have a high boiling point, so it remains a liquid inside the transformer. It is also very chemically stable, so there is no breakdown over time.

Ques.58. Single Phase transformers can be used in parallel only when their voltages are

The need for operation of two or more transformers in parallel often arises due to:

When two or more transformers run in parallel, they must satisfy the following conditions. 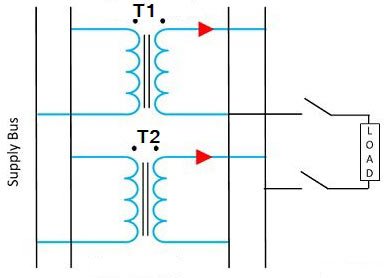 Due to the difference in the quality of percentage impedance, there will be the divergence of the phase angle of the two currents so that one transformer will be working with a lower and other with a higher power factor than the combined load.

The difference in the polarity causes the huge circulating current that flows in the transformer and even may lead to the dead short circuit.

Ques.59. When the phase sequence of supply currents are reversed, then the direction of rotation of the resultant magnetic field wave

The direction of the roof. is always from the alas of the leading phase of the three phase winding towards Me lagging phase of the winding. In a phase sequence of R-Y-B, phase R leads Y by 120° and Y leads B by 120°. So r.m.f. rotates from axis of R to the axis of Y and then to the axis of B and so on. So its direction is clockwise as shown in the figure. This direction can be reversed by interchanging any two terminals of the three phase windings while connecting to the three phase supply. The terminals Y and B are shown interchanged in the Fig.B. In such case the direction of r.m.f. will be anticlockwise.

As Y and B of windings are connected to B and Y from the winding point of view the phase sequence becomes R-B-Y. Thus R.M.F. axis follows the direction from R to B to Y which is anticlockwise.

Thus by changing any two terminals of three-phase winding while connecting it to three-phase A.C supply, the direction of rotation of r.m.f. gets reversed.

Ques.60. The availability of full -rated torque at starting is obtained from an induction motor is

When the load torque is small, the speed control of an induction motor is obtained by variation of stator voltage. In the high torque range, in the case of a wound rotor motor, rotor resistance control is used. For a good dynamic response, external resistance in rotor circuits can be varied statically and steplessly by a high-frequency thyristor chopper circuit. The figure shows such a speed control method for an induction motor.

Now, external resistance in added in each phase of rotor through slip rings as shown in Fig.

Similarly, the starting torque at slip = 1 for R2 and R’2 can be written as

Maximum starting torque is obtained when the slip is equal to the ratio between the rotor resistance (R2) and the rotor inductive reactance (X2).This slip is also known as slip at maximum torque, labeled as Sm.

It can be observed that Tmax is independent of R2; hence whatever may be the rotor resistance, the maximum torque produced never changes, but the slip and speed at which it occurs depend on R2. 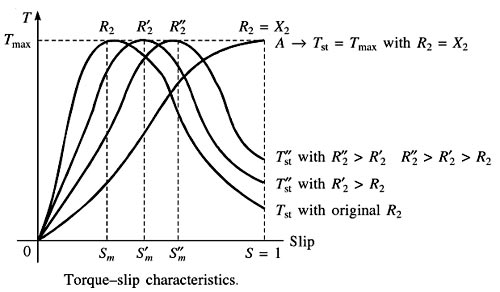 From the slip-torque characteristics of the induction motor shown in Fig.  it is clear that the starting torque T‘st with rotor resistance R’2 is greater than staring torque Ts, with R2. Therefore, staring torque can be improved by adding external rotor resistance. If now resistance in further added to the rotor to get resistance R”2 and so on, it can be seen that Tmax remains the same but the slip at which it occurs increases to S”m and so on. Similarly, starting torque also increases to T”st and so on as shown in Fig. If maximum torque Tmax is required at the start, then Sm = 1 as at start slip is always unity.

R2 = X2 which is the condition for getting Tst = Tmax

Thus, by adding external resistance to the rotor until it becomes equal to X2, the maximum torque can be achieved at the start. It is represented by point A as shown in fig. During running condition, the external resistance is removed in order to increase efficiency by reducing I2R losses. Hence such added resistance is cut off gradually and finally removed from the rotor circuit in the normal running condition of the motor. This method is specially designed to improve the starting torque at the time of staring itself.