Ques.21. Relate ‘Reluctance with the following:

The reluctance of any part of a magnetic circuit may be defined as the ratio of the drop in magnetomotive force to the flux produced in that part of the circuit. It is measured in ampere-turns/Weber and is denoted by S.

Ques.22. Which of the following losses is together called iron losses?

Core losses are also known as iron losses or Magnetic losses. These Losses are constant and independent of the load. They are induced in the machine due to hysteresis and eddy currents produced in the core produced when the magnetization is changing. They mainly occur in the armature teeth and core as also in the pole shoe.

Hysteresis losses occur due to the reversal of the magnetization of the armature core. So, the hysteresis loss can be obtained as:

The eddy current loss exists due to eddy currents. When the armature core rotates, it cuts the magnetic flux and e.m.f. gets induced in the core. This induced e.m.f. sets up eddy currents which cause power loss. Ibis loss is given by,

Where Ke = Eddy current constant
t = thickness of the core

Ques.23. In the speed-time curve of a train, speed in and time are plotted.

The curve that shows the instantaneous speed of the train in kmph along the ordinate and time in seconds along the abscissa is known as the speed-time curve.

The area under the speed-time curve gives the distance traveled during, given time internally and slope at any point on the curve toward abscissa gives the acceleration and retardation at the instance, out of the two speed—time curve is more important. 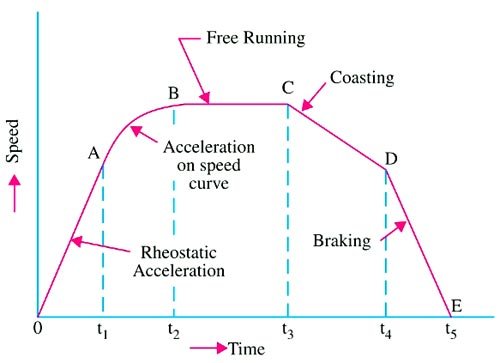 Ques.24. Identify the important feature of a DC series motor.

Applying KVL on the above circuit

Ques.27. In the circuit shown, the pressure coils of two wattmeters are connected to 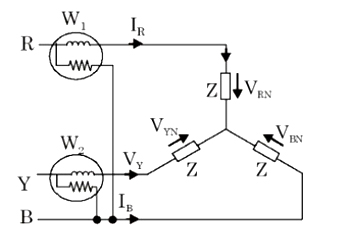 In Two wattmeter method the current coils of the wattmeter are connected with any two lines, say R and Y and the potential coil of each wattmeter is joined across the same line, the third line i.e. B as shown below in the figure . In the circuit B is the common point for both the wattmeter.

Since the voltage is the same we can say that power dissipation will be higher for the bulb with lower resistance i.e. 100W bulb, or the bulb with the higher rating will glow brighter.

In a series connection, the current flowing across each element is the same. So when the 60W bulb and 100W bulb are connected in series, the same current will flow through them. To find which bulb will glow brighter we need to find the power dissipation across each of them. From the relation

The self-inductance is given as

Ques.30. Is it possible to have current in a transmission line, under no-load conditions?

Answer.1. Yes, because of the capacitance effect

During the no-load condition, the current flowing is only charging current due to line capacitance. It increases the capacitive var in the system. Since the line is under no load the line inductance will be less. Therefore, the capacitive var becomes greater than inductive var during no load or light load condition. Due to this phenomenon, the receiving end voltage becomes greater than the sending end voltage. This effect is also called the Ferranti effect.

In the case of short lines, the effect is negligible, but it increases rapidly with the increase in the length of the line. Therefore, this phenomenon is observable only in medium and long lines. For long high voltage and EHV transmission lines, shunt reactors are provided to absorb a part of the charging current or shunt capacitive VAr of the transmission line under no load or light load conditions, in order to prevent the overvoltage on the line.