Ques.51. The law that explains about the economic size of a conductor is:

In transmission lines, a large amount of power is transmitted over a long distance. So, voltage regulation is not important because in some lines, 40% regulation is considered satisfactory. In such cases, only the economy is important. The cost of the conductor is the main part which decides the total cost of the transmission line. Hence, the selection of the proper size of the conductor for a particular line is most important.

The most economical area of the conductor is that for which the total annual cost of the transmission line is minimum. This is known as Kelvin’s law and was given by Lord Kelvin in the year 1881.

P1 and P2 are constants

α is the area of the X-section of the conductor.

As you can see from the below figure in load Z1 is connected with the only current coil. In Load Z2 both current from the current coil (CC) and voltage from voltage coil (PC) are present (Power = V × I). Hence the  Wattmeter will read power consumed by Z2. 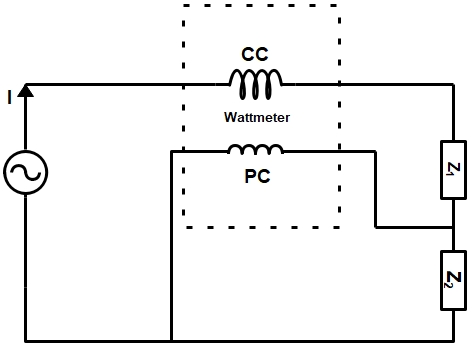 Ques.54. Find the net capacitance of the combination in which ten capacitors of 10 μF are connected in parallel.

Ques.55. Hysteresis loss is NOT a function of

Hence the hysteresis loss does not depend upon the ambient temperature.

Ques.57. The voltmeter is shown in the circuit reads: 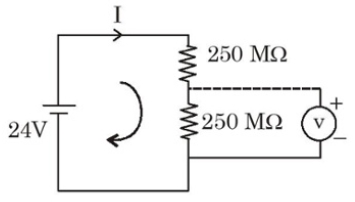 Total resistance in the given circuit

Now the Voltage in the voltmeter

In two wattmeter method the phase angle is

Ques.59. In a single-phase capacitor start-and-run motor, the minimum number of capacitors to be used in it is:

Capacitor start and capacitor run motor: Two capacitors are used for starting, but one of them is cut out when speed reaches 70 percent of the synchronous speed. The capacitor start-and-run motor starts with a high value and a low-value capacitor connected in parallel with each other but in series with the starting winding. This provides a very high starting torque. The centrifugal switch disconnects the high-value capacitor at 80 percent speed, but the lower value capacitor remains in the circuit. 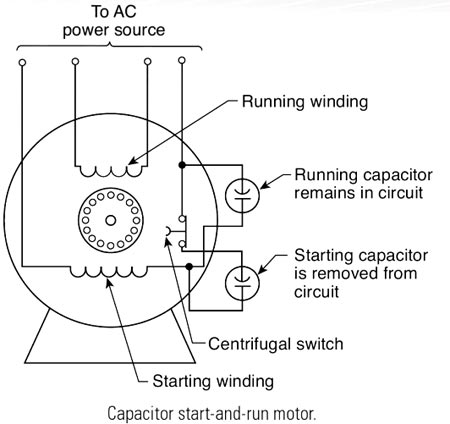 Ques.60. The meter constant of an energy meter will be given in:

Meter constant =  No. of revolution/kWh

Hence the number of revolutions made by the disc for 1 kWh of energy consumption is called meter constant.

The meter constant is always written on the name plates of the energy meters installed m homes, commercial and industrial establishments. If the meter constant of an energy meter is 1500 rev/kWh, it means that for the consumption of 1 kWh, the disc will make 1500 revolutions.