Pin Insulator:- Pin insulators are commonly used on rural and urban primary distribution lines. These can be used up to 33 kV. Pin insulators can be of a single piece or multipiece. The pin type of insulators is uneconomical beyond 33 kV operating voltage. Also, the replacement of these insulators is expensive. For these reasons for insulating overhead lines against higher voltages, suspension insulators are used.

Ques.2. The water hammer effect is expected in a

When the generator of a water turbine is disconnected from a power network, the turbine speed starts to increase. Consequently, the turbine controller closes the inflow to the turbine, thus creating a water hammer in the penstock.

Water hammer effects in the penstock are created by any changes in discharge through the turbine, caused by changes in the connected power network. Sometimes, the entire system becomes unstable due to the mutual influence of a turbine equipped with a controller and to unsteady flow in the penstock. In such a case, even small variations in pressure in the penstock may increase steadily and perilously.

Ques.3. The change in DC excitation of a synchronous motor will also change the

Consider a synchronous motor operating at a certain load. The corresponding load angle is δ. At the start, consider normal behavior of the synchronous motor, where excitation is adjusted to get Eb = V i.e. induced e.m.f. is equal to an applied voltage. Such excitation is called Normal Excitation of the motor. The motor is drawing certain current la from the supply and the power input to the motor is say Pin.

Under Excitation:- When the excitation is adjusted in such a way that the magnitude of induced EMF is less than the applied voltage (Eb < V) the excitation a called Under excitation. The p.f. cosφ decreases and becomes more and more lagging in nature.

Over Excitation:- The excitation to the field winding for which the induced e.m.f. becomes greater than the applied voltage (Eb > V), the excitation a called over-excitation. In this case, the power factor is leading in nature.

Ques.4. Four relations have been given. Select the correct relation?

According to Boolean algebra law

Therefore in the given question

Ques.6. Both the main winding and auxiliary winding of a single-phase induction motor is placed on the ______?

The simplest method of starting is to provide an auxiliary winding on the stator in addition to the main winding. The two windings are placed in the stator with their axes displaced by 90 electrical degrees in space.

Ques.7. Which of the following power plants employs the Rankine cycle? 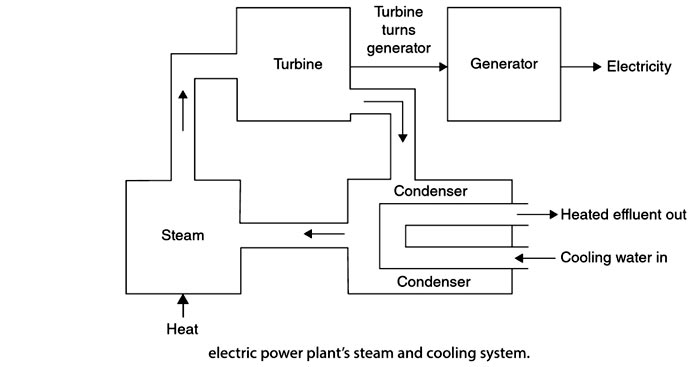 The Rankine cycle is a model used to predict the performance of steam turbine systems. It was also used to study the performance of reciprocating steam engines.  The heat is supplied externally to a closed loop, which usually uses water as the working fluid. It is named after William John Macquorn Rankine, a Scottish polymath and Glasgow University professor.

Ques.8. The torque angle of a 3-phase synchronous motor depends on its _____

The torque angle of a 3-phase synchronous motor depends on its Load.

The rotor of a synchronous motor rotates in synchronism with the rotating flux of the stator. The increases in shaft load cause the rotor magnets to change their angular position with respect to the rotating flux. The torque angle is defined as

A synchronous motor operates at the same average speed for all values of the load from no load to peak load. When the load on a synchronous motor is increased, the motor slows down just enough to allow the rotor to change its angular position in relation to the rotating flux of the stator and then goes back to synchronous speed.

Similarly, when the load is removed. it accelerates just enough to cause the rotor to decrease its angle of lag in relation to the rotating flux, and then goes back to synchronous speed. 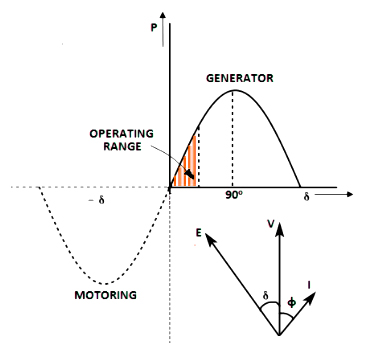 The motor comes to stop if the load is increased beyond the point when δ = 90°. The torque-angle characteristics for the synchronous machine are shown in Fig. for both motoring as well as generating action.

As the load on the synchronous motor increase, there is no change in its speed. But what gets affected is the load angle δ i.e. the angle by which the rotor axis retards with respect to the stator axis.

Ques.9. Permeance is analogous to an electrical circuit?

The permeance of the magnetic circuit is defined as the reciprocal of the reluctance.

Ques.10. 1 kcal is approximately equal to