Ques.11. Which of the following can measure the resistance having the value below 1 Ohm most precisely? (SSC-2018 Set-2) 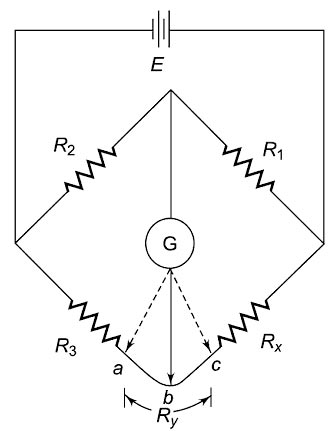 When the connection is made to point “c” Ry is added to the bridge arm R3 and the resulting measurement of RX is lower than the actual value because now the actual value of R3 is higher than its nominal value by the resistance Ry. If the galvanometer is connected to point “b” in-between points “c” and “a”, in such a way that the ratio of the resistance from “c” to “b” and the from “a” to “b” equals the ratio of resistances R1 and R2, then

The actual equation of Kelvin’s bridge is

Ques.12. Which of the following quantities cannot be measured using a multimeter? (SSC-2018 Set-2)

Ques.13. Which of the following materials when used as the viewing surface of a CRO gives a bluish glow? (SSC-2018 Set-2)

The actual conversion of light energy from the electricity occurs on the display screen when electrons strike the material called phosphor. A phosphor is a chemical that shines when exposed to electrical energy. A commonly used phosphor compound is zinc sulfide. When the pure zinc sulfide is struck by an electron beam, it gives a green glow. The exact color is given by phosphor also depends on the presence of small amounts of impurities. For example, zinc sulfide with silver metal gives a blue glow in the form of an impurity and copper metal gives a green glow in the form of impurity.

Ques.14. What is the percentage voltage error of a potential transformer with the system voltage of 11,000 V and having turns ratio of 100, if the measured secondary side voltage is 105 V? (SSC-2018 Set-2)

Ques.15. Which of the following is the cause of the speed error in the induction type energy meter? (SSC-2018 Set-2)

The basic principle of induction type energy meter is electromagnetic induction. When alternating current flows through two suitably located coils (current coil and voltage coil), it produces the rotating magnetic field which is cut by the metallic disc suspended near to the coils. Thus, an emf is induced in the disc which circulates eddy currents in it. 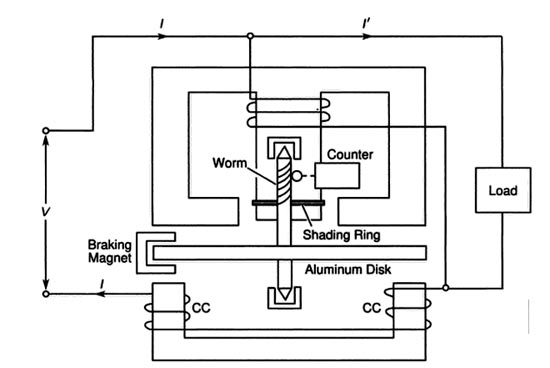 The following are the common errors which may creep in an energy meter:

Speed error:-  Due to the incorrect position of the brake magnet, the braking torque not correctly developed. This can be tested when the meter runs at its full load current alternatively on loads of unity power factor and a low lagging power factor. The speed can be adjusted to the correct value by varying the position of the braking magnet towards the center of the disc or away from the center and the shielding loop. If the meter runs fast on inductive load and correctly on non-inductive load, the shielded loop must be moved towards the disc. On the other hand, if the meter runs slow on no inductive load, the brake magnet must be moved towards the center of the disc.

Phase Error:- The phase error is introduced because the shunt magnet flux does not lag behind the supply voltage by exactly 90° due to some resistance of the coil and iron losses. The angle of lag is slightly less than 90°. Because of this error, the torque is not zero at zero power factor of the load and Therefore, energy meter registers some energy even though the actual energy passing through the meter is zero at zero power factor.

In order to remove this error, the flux produced by the shunt magnet should be made to lag behind the supply voltage exactly by 90°. This is accomplished by adjusting the position of copper shading band provided on the central limb of the shunt magnet. An error on the fast side, under these conditions, can be eliminated by bringing the shading band nearer to the disc and vice versa.

Friction Error:- This error is introduced due to friction at the rotor bearing and in the register mechanism. Because of this error, an unwanted braking torque acts on the moving system and meter registers less energy than the actual energy passing through it.

This error is compensated by placing two short-circuited bands on the outer limbs of the shunt magnet. These bands embrace the flux contained in the two outer limbs of the shunt magnet. An emf is induced and the current circulates through them. This causes phase displacement between the enclosed flux and the main gap flux. As a result of this, small driving torque is exerted on the disc solely by the pressure coil which compensates, the frictional torque. The amount of this corrective torque is adjusted by the variation of the position of the two bands and it should be just sufficient to overcome the frictional torque without actually rotating the disc at on-load.

Creeping Error:- The slow but continuous rotation of the energy meter when only the pressure coil is excited and no current is flowing through the current coil is called creeping. This error may be due to excessive friction compensation, excessive voltage supply, stray magnetic field, etc.

In order to prevent creeping at no-load, two holes of the same radius are drilled in the disc on the opposite side of the spindle. This causes sufficient distortion of the field to prevent continuous rotation. The disc remains stationary when one of the holes comes under one of the poles of the shunt magnet.

Temperature Error:- By the change of temperature, the parameters of the coils change slightly which introduces a small error in the meter. However, this error is negligible and there is no need to provide any means to eliminate this error.

Frequency Error:- Since the energy meters are used normally at the fixed frequency, therefore they are designed and adjusted to have a minimum error at declared supply frequency which is normally 50 Hz in India.

Ques.16. Which of the following bridge is the most suitable for the measurement of the unknown resistance? (SSC-2018 Set-3) 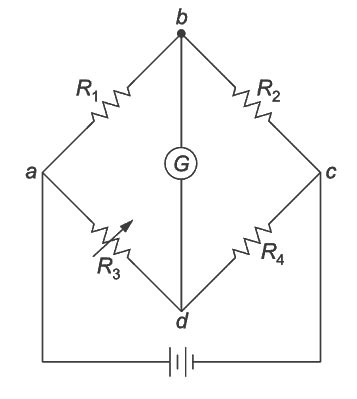 Under the balanced condition, the following relation is obtained

If R1 is unknown resistance then

The inductance of an inductive coil is generally measured by the usual inductive circuit like Maxwell-Wein Bridge, Hay Bridge, Anderson’s bridge, etc.

The Anderson’s bridge gives the accurate measurement of the self-inductance of the circuit.

Ques.17. Which of the following is the CORRECT expression for the quality factor of the Maxwell Inductance-capacitance bridge? (SSC-2018 Set-3) 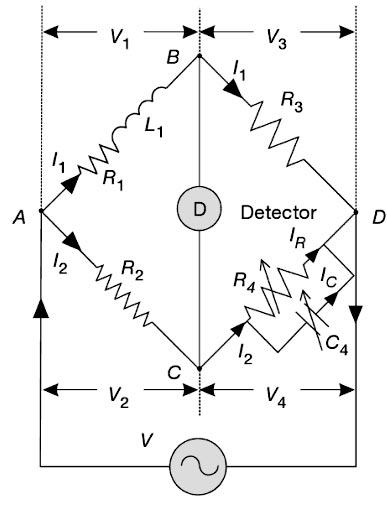 The unknown inductor L1 of effective resistance R1 in the branch AB is compared with the standard known variable capacitor C4 on arm CD. The other resistances R2, R3, and R4 are known as non-inductive resistors.

Under the balance condition, the unknown quantities i.e resistor R1 and C1 can be determined by the

It is interesting to note that both in Maxwell’s Inductance Bridge and Inductance-Capacitance Bridge, the unknown Inductor L1 was always associated with a resistance R1. This series resistance has been included to represent losses that take place in an inductor coil. An ideal inductor will be lossless irrespective of the amount of current flowing through it.

However, any real inductor will have some non-zero resistance associated with it due to the resistance of the metal wire used to form the inductor winding. This series of resistance causes heat generation due to power loss. In such cases, the Quality Factor or the Q-Factor of such a lossy inductor is used to indicate how closely the real inductor comes to behave as an ideal inductor.

The Q-factor of an inductor is defined as the ratio of its inductive reactance to its resistance at a given frequency. Q-factor is a measure of the efficiency of the inductor. The higher the value of Q-factor, the closer it approaches the behavior of an ideal, lossless inductor. An ideal inductor would have an infinite Q at all frequencies.

The Q-factor of an inductor is given by the formula Q = ωL/R, where R is its internal resistance R (series resistance) and ωL is its inductive reactance at the frequency ωo.

Q-factor of an inductor can be increased by either increasing its inductance value (by using a good ferromagnetic core) or by reducing its winding resistance (by using good quality conductor material, in special cases may be superconductors as well).

In Maxwell’s Inductance-Capacitance Bridge, Q-factor of the inductor under measurement can be found at balance condition to be

The above relation for the inductor Q factor indicates that this bridge is not suitable for the measurement of inductor values with high Q factors since in that case, the required value of R4 for achieving balance becomes impracticably high.

Ques.18. Which of the following instrument is used for the measurement of insulation resistance?(SSC-2018 Set-3)

Insulation resistance of the installation depends on many factors such as atmospheric conditions, humidity, dirt, etc. As such its calculation is not possible, but it can be readily measured. Normally the insulation resistance is quite high and can be measured by an instrument called megger usually used for the measurement of high resistance. The main object in performing this test is to ascertain whether the complete wiring is sound enough to avoid leakage current.

Insulation testing megger is a portable instrument used for testing the insulation resistance of a circuit, and for measuring the resistance of the order of megaohms in which the measured value of resistance is directly indicated on a scale.

The deflection sensitivity of a magnetic deflection cathode ray tube is defined as the amount of spot deflection on the screen when the potential of 1 volt is applied to the deflection plate.

In most CROs, the deflection sensitivity is expressed as the ratio of input voltage to the length of the trace.

Deflection sensitivity of the CRO is given as

Ques.20. Determine the value of current (in mA) required for the full-scale deflection of a voltmeter when the sensitivity of the voltmeter is 125 Ohms/Volt.(SSC-2018 Set-3)