Proportional to the square of the current

The induction type relays are also called magnitude relays. These relays work on the principle of the induction motor or an energy meter. In these relays, a metallic disc is allowed to rotate between the two electromagnets. The coils of the electromagnets are energized with the help of alternating currents. The torque is produced in these relays due to the interaction of one alternating flux with eddy currents induced in the rotor by another alternating flux. The two fluxes have the same frequency but are displaced in time and space. As the interaction of alternating fluxes is the base of operation of these relays, these are not used for the d.c. quantities. These are widely used for protective relaying involving only a.c. quantities.

Based on the construction, the various types of induction type relays are

It consists of an aluminum disc that is free to rotate in an air gap of an electromagnet. The part of the pole face of each pole is shaded with the help of a copper band or ring. This is called a shading ring. The total flux produced due to the alternating current split into two fluxes displaced in time and space due to the shading ring. 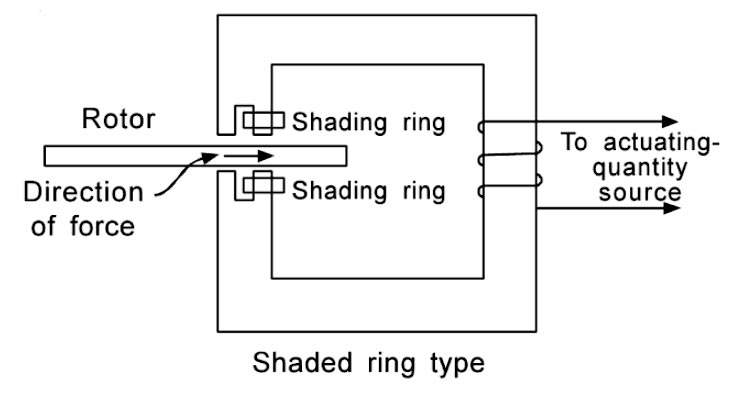 Due to the alternating flux, e.m.f. gets induced in the shading ring. This e.m.f. drives the currents causing the flux to exist in the shaded portion. This flux lags behind the flux in the unshaded portion by an angle α.

The torque produced in the shade pole type relay is

I = current  in the relay

Hence in shaded pole type relay, the torque is directly proportional to the square of the current