Two series motors are mechanically coupled. One machine is run as a motor and the other as a generator. The iron and friction losses of the machines will be identical when

Two series motors are mechanically coupled. One machine is run as a motor and the other as a generator. The iron and friction losses of the machines will be identical when

Their speeds and excitations are identical

Hopkinson’s test is also referred to as the regenerative or Back-to-Back test.

When large machines are to be tested, the direct loading method involves a lot of loss of power. To avoid this, the regenerative method of testing is used where possible. This type of test can easily be performed on two identical shunt machines mechanically coupled to each other. One of the machines is run as a motor driving, the other machine as a generator. This generator supplies the motor. i.e. connected back to back so that most of the power required by the motor is fed from the generator, while the losses of both the machines — generator and motor — are supplied from the mains. This reduces the power taken from the mains. This type of test is known as the Hopkinson test. Figure. shows the connection diagram for the Hopkinson test on two similar shunt machines. 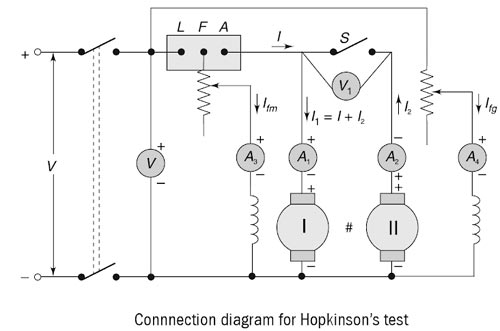 One of the machines is started as the motor through the starter taking supply from the mains. The field current is adjusted to run the machine at the rated speed. The second machine is mechanically coupled and runs at the same speed. The excitation of the machine is so adjusted that the voltage across the armature is slightly higher than the supply voltage. This can be checked by the voltmeter V. The polarities of the machines should be suitable for parallel operation. When the voltmeter reads zero or slightly higher by 1 or 2 V, indicating that it would be generator action, the switch is closed so that both the machines are now in parallel across the supply. The excitation of the generator is so adjusted that the emf in the generator armature increases allowing more current through the motor armature and, thus, loading the machines. The losses are supplied by the mains. As two machines are similar and of equal size, and rating the constant losses — friction, windage iron is assumed to be equal.

The field current of the generator is supplied from the mains. As an alternative, it can be supplied from the terminals of the generator. The location of the ammeter is such that it reads current I excluding the field currents of both the machines. The machine with smaller excitation current acts as a motor because the back emf is less than that of the induced emf of the other machine. Thus, it admits more armature current and develops greater torque. The load on the machines can be adjusted as desired and readings are taken.

The merits of this test are…

The demerits of this test are