Que.1. A tool that is used to remove the drill from the spindle hole is known as:

DRILL DRIFT:-  A wedge-shaped piece of steel that is used to remove tapered shank tools, such as drills from spindles, sockets, and sleeves.

Ques.2. A pipe vice is used to

Answer.4. To hold the pipe in position during different operations on the pipe

A vice is used for gripping and holding a workpiece in position for carrying out on its various bench working operations.

Pipe vice:- Pipe ice is used to hold pipes for cutting and threading. It is made of cast iron but has a handle of mild steel. Its size is given by the diameter of its jaws. The lower jaw is fixed whereas the upper jaw is movable. The size of its jaw is 0 to 250 mm and 0 to 500 mm. 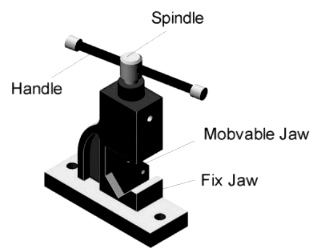 Ques.3. Lubricant starvation occurs due to the _____ of a lubricant

Starvation occurs when the lubricated contact uses up the lubricant supply, and there is not enough lubricant in the contact to support the separation between solid surfaces. “Lubricant starvation” is a special case of undersupply. If there is not enough lubricant available starvation occurs which may lead to increased friction, wear, and related undesired effects. In the worst case, this results in total failure of the respective machine or assembly.

Ques.4. Which of the following is NOT the type of drill?

A drill is a tool used to make cylindrical holes by rotating and pressing the tool against a workpiece.

Drills are manufactured in a wide variety of types and sizes. The following types of drills are most widely used.

Note:- Periphery is the outer circumference of the drill.

Ques.6. Compound rest is used for

Compound rest: It supports the tool post and is mounted on the top of the cross slide. It has a graduated circular base and can be swiveled to any angle for getting a taper and angular cuts on a job. The compound rest is moved manually by rotating its handle.

Ques.7. The size of a manufactured component obtained by measurement indicates the:

Actual size: Actual size may be defined as the dimensions achieved by any matching/production process against the nominal size.

To distinguish between nominal and actual size, nominal size is written without any dimension, for example, 2 x 10, whereas dimensions are included when describing actual sizes, such as 1 x 9  inches or 38 x 235 mm. When working in metric units, only actual sizes are used.

Ques.8. Which of the following is NOT a corrosive flux used in soldering?

To make a satisfactory joint, both the metal to be joined and the solder must be free of dirt, grease, oxides, and other foreign matter which would keep the solder from adhering to the metal. Fluxes are used to clean the joint area, to remove the oxide film which is normally present on any metal, and to prevent further oxidation. Fluxes also decrease the surface tension of the solder and thus make the solder a better wetting agent.

Fluxes are generally classified as corrosive, mildly corrosive, and noncorrosive.

CORROSIVE FLUXES have the most effective cleaning action. However, any trace of corrosive flux that remains on the work will cause subsequent corrosion of the metal. Therefore corrosive fluxes are not used for soldering electrical connections and for other work in which corrosion would present a serious problem.

The most commonly used corrosive fluxes are sal ammoniac (ammonium chloride) and zinc chloride. These fluxes are frequently used in solution or in paste form. The solvent is evaporated as the work is heated, leaving a layer of solid flux on the work. At the soldering temperature, this layer of flux melts and partially decomposes, liberating hydrochloric acid. The hydrochloric acid dissolves the oxides from the surface of the work and from the solder.

Note:- Rosin is a Non-corrosive flux used in soldering

Ques.9. Which of the following is use of a tapered roller bearing?

Answer.1. It is used when the axial thrust is more than the radial load.

Depending upon the type of rolling element, the bearings are classified as

Depending upon the direction of load, the bearings are also classified as radial bearing and thrust bearing.

The advantage of tapered Roller Bearing is

Blowpipe or welding torch: The high-pressure blowpipe consists of two passages: one is for oxygen and the other is for acetylene. Both the gases are mixed in a chamber and then driven out through the orifice of the blowpipe nozzle with the desired velocity. These nozzles are usually known as tips and are made interchangeable so that the same blowpipe can be used for different sizes of tips.

Note: Acetylene cannot be filled alone in a cylinder due to dissociation at high pressure so it is mixed with a small amount of acetone.