Ques 11. Earth electrode used in Plate Earthing is a

In the plate earthing a pit of about 3 meters depth is dug. The earth electrode used may be a copper plate having a dimension of 60 cm × 60 cm × 3.18 mm. (In the case of the G.I (Galvanized Iron) plate, the dimension is 60 cm × 60 cm × 6.36 mm). After placing the electrode in the pit, layers of charcoal and salt are used to fill the space around it.

The electrode can be connected to a G.I. pipe of 12.7 mm diameter for carrying G.I. earth wire. The pit is covered with an iron plate for periodic check-ups. To increase moisture and dampness a pipe is provided for carrying water.

Ques 12.  Which of the following is used to maintain the constant voltage in the feeder circuit?

An induction regulator is used to maintain the constant voltage in the feeder circuit.

The voltage in the portion o the winding which is added or subtracted in an autotransformer is made variable, so the outgoing voltage may thus be kept approximately at the rated value. These are two types of voltage regulators commonly used, and the principle of operation of both is the same as for the autotransformer. 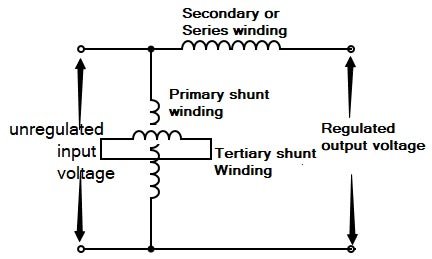 The primary (high-voltage) winding is mounted so that it can rotate on the axis of the secondary winding. The voltage induced in the secondary or series winding depends on the position of the primary winding. The high-voltage winding thus can be placed so that the voltage induced in the series winding will add or subtract from the input line voltage.

When the load current is small. the primary will be rotated in one direction, thus lowering or bucking the line voltage. When the load current is larger, the primary will be rotated in the opposite direction, thus boosting it. The reactance of the secondary can cause a large voltage drop during the rotation of the primary. To avoid this drop (or cancel it out), a third coil is added and mounted on the movable core at a right angle to the primary winding and short-circuited on itself. The turning of the primary coil is usually controlled by means of a voltage-sensitive relay (called a contact-making voltmeter connected to the output side of the circuit.

Ques 13.In an earthed neutral system, the magnitude of transient voltage is:

The process of connecting the neutral point of a supply system on the non-current carrying parts of electrical apparatus to the general mass of earth in such a manner that at all times an immediate discharge of electrical energy takes place without danger is called earthing.

The main advantages of neutral earthing are:

In an air blast breaker, a high-velocity jet of air is made to flow through the arcing contacts that extinguish the arc much before natural ac current 0 is reached, the air blast breaker retains the same extinguishing power irrespective of the nature of the fault, consequently, the blast of air sweeps out the ionized particles in between the contacts thereby building the resistance and hence ultimately extinguishing the arc.

Ques 16. The frequency of an induction motor having synchronous speed of 600 rpm, is 40 Hz. Find the number of poles.

Speed of Induction motor is given as

The value of the quantity to be measured should not get altered significantly because of the insertion of the instrument to measure it. Ideally, an ammeter should have zero resistance and a voltmeter infinite resistance to give correct readings.

A voltmeter is connected in parallel with the original circuit. If it draws any current from the main circuit, the actual Potential Difference in the main circuit may not be determined.

Current chooses a path with low resistance, hence the resistance of an ideal Voltmeter must be infinitely high so that no current flows through it and the entire current flows only in the circuit.

Ques 18.  Three wires having conductances 2,3 and 6 mhos respectively are connected in parallel in a circuit. The equivalent resistance in the circuit will be

Since the conductance are connected in parallel, therefore, its equivalent conductance

Since conductance is the inverse of resistance i.e

Uninterruptible power supply (UPS) is a type of power supply system that contains a battery to maintain power to provide power to electronics in the event of a power surge or outage.