Thyristors can be used as ideal switches in power electronics circuits. When thyristors are forward biased and a gate pulse is applied between anode to cathode, these devices will be turned ON. Once the thyristor is turned ON, it operates in the ON-state. These devices can be turned OFF by natural commutation and forced commutation. The commutation circuit for the thyristor is bulky and expensive. Thyristors can be used as switching devices up to about 1 kHz.

GTO is just like a conventional thyristor but the turn-OFF feature is incorporated into the device When a positive gate current is applied in between gate and cathode, the device will be turned Off and conducts. Whenever a negative gate current of required amplitude is applied to gate-cathode terminals, GTO will be turned OFF. Due to its self-turned OFF capability, GTO is the most suitable device for inverters and choppers.

The important difference is that the GTO may be turned off by a negative current pulse applied to the gate terminal. This important feature permits the GTO to be used in self-commutated inverter circuits. The magnitude of the off pulse is large and depends on the magnitude of the current in the power circuit. Typically, the gate current must be 20% of the anode current.

A high turn-off gain (over 20) can be achieved at the cost of turn-off switching losses with a slow reverse commutating gate-current (slow di/dt). This results in additional commutation and gate losses.

Astable multivibrator: – A free-running multivibrator that has NO stable states but switches continuously between two states this action produces a train of square wave pulses at a fixed frequency.

Ques 23. Slip rings and brushes are found in

A wound rotor is also called a slip ring induction motor. In the wound rotor, the slip rings are mounted on the rotor shaft. The external resistance can be connected to the rotor winding through the brush and slip ring connection.

In the squirrel cage induction motor, the rotor bars are permanently short-circuited by end rings and there are no slip rings and brush gears hence it is not possible to connect an external resistance in the circuit in series with the rotor conductors.

The faint violet glow is even between the two parallel polished conductors and can be seen all along the length of the conductors. At the rough points, it appears a little bit brighter. In the case of d.c. voltage reddish beads are formed near the negative conductor while a smoother bluish-white uniform glow is formed near the positive conductor.

In TN-C earthing system, the N conductor and PE conductor are combined as a PEN conductor. Protective conductors (PE) provide the bonding connection between all exposed and extraneous conductive parts of an installation, to create the main equipotential bonding system.

These conductors conduct fault current due to insulation failure (between a phase conductor and an exposed conductive part) to the earthed neutral of the source. PE conductors are connected to the main earthing terminal of the installation. 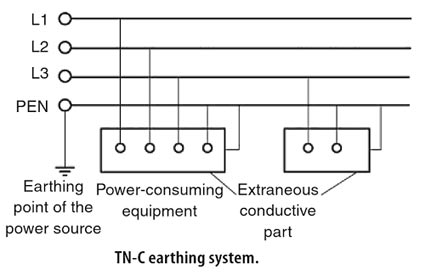 TN-C system is also called a three-phase four-wire system. Its main advantages include reducing a conductor, plus simple installation and saving costs.

The main disadvantages of TN-C conductors are:

Ques 26. Screened cables can be used for voltages

These cables are used for the voltage levels of 22 kV and 33 kV. The two types of screened cables are

Note:- In special cases, H type cables can be extended upto a voltage level of 66 kV

Ques 27. Peak factor for a half-wave rectified sine wave is

The light output of sodium vapour lamp is yellow in colour, which distort the surroundings colours hence it is used only for street lighting.

Ques 29. Distribution transformers must be designed to have maximum efficiency at

Ques 30. _________ gas is majorly produced by anaerobic decomposition of human or animal excreta.

Anaerobic digestion is a collection of processes by which microorganisms break down biodegradable material in the absence of oxygen. The process is used for industrial or domestic purposes to manage waste or to produce fuels.

In the presence of specialized methanogens, the intermediates are converted to the ‘final’ end products of methane, carbon dioxide, and trace levels of hydrogen sulfide. In an anaerobic system, the majority of the chemical energy contained within the starting material is released by methanogenic bacteria such as methane.