Ques 81. The power generation of a Thermal power plant is based on

A thermal power station is a power station in which heat energy is converted to electric power. In most places in the world, the turbine is steam-driven. Water is heated, turns into steam, and spins a steam turbine which drives an electrical generator. After it passes through the turbine, the steam is condensed in a condenser and recycled to where it was heated; this is known as a Rankine cycle.

Ques 82. In an induction motor, number of stator slots should never be equal to number of rotor slots in order to prevent:-

Ques 83. As compared to the D.O.L starter, the Star Delta starter operates at 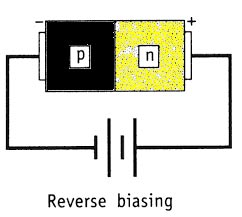 In reverse biasing, the positive terminal of the battery is connected to the n-side and the negative terminal to the p-side of the junction.

In the reverse-biased condition, a transient current flows, and both the carriers are pulled away from the junction. The increase in barrier energy is given by eV, where V is the voltage applied across the junction. When the potential formed by the widened depletion layer equals the applied voltage, the current ceases except for the small thermal current generated by the minority carriers. This current l is called reverse saturation current, which is independent of the applied reverse voltage (V) and increases with the temperature of the diode. The p-n junction conducts the current easily when forward biased and practically no current flows when it is reverse biased.

Ques 86. Magnetic flux will be ___________ if the surface area vector of a surface is perpendicular to the magnetic field.

Magnetic flux is the product of the average magnetic field times the perpendicular area that it crosses.

θ: angle between a perpendicular vector to the area and the magnetic field 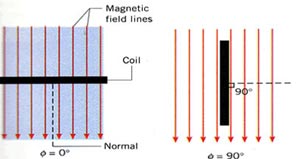 The N-type impurity loses its extra valence electron easily when added to a semiconductor material, and in so doing, increases the conductivity of the material by contributing a free electron. This type of impurity has 5 valence electrons and is called a PENTAVALENT impurity.

Arsenic, antimony, bismuth, and phosphorous are pentavalent impurities. Because these materials give or donate one electron to the doped material, they are also called DONOR impurities. When a pentavalent (donor) impurity, like arsenic, is added to germanium, it will form covalent bonds with the germanium atoms.

Pure germanium may be converted into an n-type semiconductor by “doping” it with any donor impurity having 5 valence electrons in its outer shell. Since this type of semiconductor (N-type) has a surplus of electrons, the electrons are considered MAJORITY carriers, while the holes, being few in number, are the MINORITY carriers.

A null method of measurement is a simple, accurate, and widely used method that depends on an instrument reading being adjusted to read zero current only. The method assumes:

(i) If there is any deflection at all, then some current is flowing;

(ii) If there is no deflection, then no current flows (i.e. a null condition).

In a Deflection type system, the quantity to be measured produces an effect either in the form of a voltage or a current. This effect is then utilized to produce a torque that causes a mechanical deflection. With the help of a spring system, this torque is countered by a restoring torque that increases with the increase in deflection.

Ques 89. AC drives can be used to control

Variable Speed Drives (VSD) are used to control the speed, torque, power, and direction of motors. They are used for induction, synchronous, and DC motors. Drives are available in two basic types

Ques 90. Which of the following other than Mercury is filled in HPMV lamps?

Mercury vapor discharge at low pressure gives mainly ultraviolet radiation. HPMV lamp consists of two tubes or bulbs. The inner discharge tube is made of tough quartz glass having liquid mercury and argon gas {for starting). The discharge tube is contained in an outer envelope, the inside of which is coated with ﬂuorescent power.

The space between two bulbs is ﬁlled with an inert gas. For starting the ignition, an auxiliary electrode is kept inside the discharge tube near one of the main electrodes and connected to another electrode through carbon resistance. When the normal supply voltage is applied, an electric field is set up between starting auxiliary electrode adjacent to the main electrode. This causes the discharge to first take place between them by limiting carbon resistance. This charge to full brilliance requires 2 to 4 minutes. 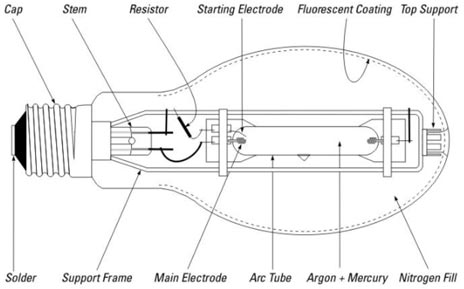 Once the arc tube is filled with mercury vapor, a low resistance path is created for the current to Bow between the main electrodes due to which arc shifts to the main electrode and the discharge continue. When the applied voltage is removed, the lamps will not restart till mercury vapor pressure has filled low enough to allow for re-discharge. This time is again 4 to 8 minutes.

The discharge from the tube again strikes with the fluorescent coating of the outer bulb from which secondary emission starts which give crisp white light in color corrected type design (fluorescent type).