Ques 11. Current rating is not necessary in the case of

An isolator is a off-load device which is employed only for isolating the circuit when the current has already been interrupted. They ensure that the current is not switched into the circuit until everything is in order. They do not have any specified current breaking capacity or current making capacity.

Statement 1:  Electricity is distributed from a single point in a radial distribution system

Statement B:  There is less fluctuation in supply at the consumer’s terminal.

Which of the following is correct?

The RIng main system is very reliable as each distributor is fed via *two feeders. In the event of a fault on any section of the feeder, the continuity of supply is maintained. Hence there are fewer voltage fluctuations at consumer terminals.

Ques 13. When the sender’s end voltage is more the power transmitted will be

Voltage regulation of transmission line is given as

When the VS >> VR the power transfer is maximum

Ques 14. Critical Resistance in a DC generator is increased by

Critical Resistance and Critical Speed of the DC Machine

Thus we can deﬁne critical resistance as that resistance of the ﬁeld circuit at a given speed at which generator just excites and starts voltage building while beyond this value generator fails to excite.

Ques 15. Self-excitation of a series generator

In the case of a series generator 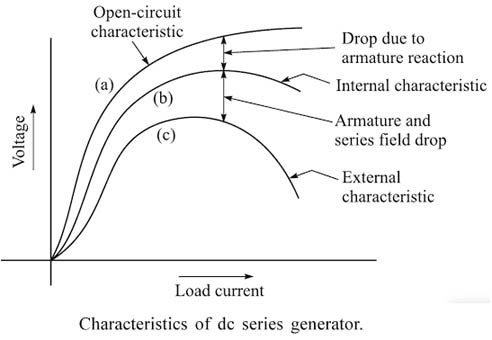 The conditions for voltage build up in self-excited generators are:

Ques16. If a DC series motor is made to run on AC supply. It will

Ques 17. The rotor reactance per phase, in an induction motor, is:

A rotor reactance is due to the circuit inductance formed by the cage conductors embedded in iron. Since reactance is directly proportional to frequency hence the rotor will vary as the slip changes.

Rotor Reactance per phase at standstill

Ques 18. The ratio of voltage Drop across a conductor to the conductor’s resistance is:

And this Ohm’s Law :

Ques 19. The impedance of a series resonant circuit is:

At a particular frequency (resonant frequency), we find that X1=X2 because the resonance of a series RLC circuit occurs when the inductive and capacitive reactances are equal in magnitude but cancel each other because they are 180 degrees apart in phase.

Ques 20. Which of the following does not increase when the load on the squirrel cage induction motor is increased from No-load to full load?