Ques.111. Determine the current flowing through the 5-Ω resistor in the following circuit.

Mica is an insulating and dielectric material.

When two conducting plates are brought closer and are separated by another plate that is made up of insulating material leads to the formation of the capacitor.

2. Capacitors with mineral oil as dielectric:- These capacitors give a large value of capacitance with a small amount of dielectric loss.

Let the expression be as follows:-

Where φ represent the concerned phase-shift

Ques.114. A material having the property of becoming polarised in response to applied mechanical stress is called _____

Piezo is derived from the Greek word meaning to press and the piezoelectric eject is the production of electricity by pressure. It occurs only in insulating materials and is manifested by the appearance of charges on the surface of a single crystal that is being mechanically deformed. Piezoelectric materials have the property of becoming electrically polarized in response to applied mechanical stress.

When a material gets electrically polarized if it is subjected to mechanical stress and it also gets strained when subjected to an electric field, the material is called piezoelectric material.

This property has an inverse: when electric stress (a voltage) is applied the material becomes strained. The strain is Directly Proportional to the applied field E. i.e., stain ∝ E.

These are the materials that possess spontaneous polarization even in the absence of an external electric field.

where, ΔT = Change in temperature

Piezoelectric materials have the following applications:

Ques.115. Which material is used for overhead transmission lines?

The material used as the conductor for power transmission and distribution lines must possess the following characteristics:

Copper and aluminum conductors are used for overhead transmission of electrical power. In the case of high voltage transmission, aluminum with a steel core is generally used. Sometimes cadmium, copper phosphor, bronze, copper weld, and galvanized steel are also used as transmission conductors. The choir of the conductor used for transmission purely depends upon the cost, as well as required electrical and mechanical properties.

Materials employed for transmission lines are

Copper: It is an ideal material for overhead lines having high electrical conductivity and greater tensile strength. Copper has high current density and its advantages are:

Steel-cored aluminum (ACSR): For transmission of high voltages, multi-stranded (composite) conductors, such as stranded copper conductors, hollow copper conductors, and aluminum conductor steel reinforced (ACSR) are used. An ACSR conductor has a central core of galvanized steel wire covered with successive layers of aluminum strands, which are electrically in parallel. Because of galvanized steel wire, the tensile strength of the conductor is increased, so that the sag is reduced. It reduces the tower height and is useful for increasing the span length. 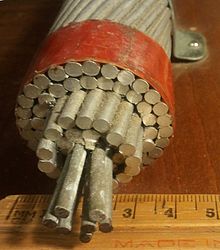 Another advantage of the ACSR is that the diameter of the conductor may be increased so that the effect of the corona is less. When compared with the equivalent copper conductor, the breaking strength of ACSR is high, whereas its weight is less.

Copper base alloy:- Copper and copper-base alloys are unique in their physical properties. When alloyed with zinc, tin, lead, nickel, silicon, aluminum, etc., they are used as cast. Their tensile strength is of the order of 150-170 MN/m2. However, rolling, drawing and another hot and cold working can increase their tensile strength to 280 MN/m2 for annealed material and to a maximum of 450 MN/m2 for the hard-drawn wire. Cold-drawn copper is used for the conductor in overhead transmission lines, bus bars, etc. where high mechanical strength is needed. Annealed copper due to its flexibility is used in cables. As an insulated conductor, hard-drawn copper is used for commutator segments in electrical machines since it can withstand wear on the parts of the brushes.

Cadmium copper:- Co, when alloyed with cadmium, chromium, silver, and tellurium in a small percentage increases its strength at the cost of reduced conductivity. It is used for rotor bars, transmission line conductors, and traction collector wires. Copper-containing 0.7 to 1.0 percent cadmium has greater strength and better resistance to wear. It is commonly used for contacts and telephone wires. Copper-containing the small percentage of silver is a special type of high conductivity copper and is used for rotor conductors of large turbo-generators and commutators.

Cadmium copper is costlier than copper. They will be economical for a line with long spans and small cross-sections.

Ques.116. Which one of the following must be ensured when the two batteries are connected in parallel?

Hence the potential difference across each cell remains the same. All the cells connected in parallel should have the same voltage otherwise the cells with higher voltage will supply current to the cells with lower voltage. 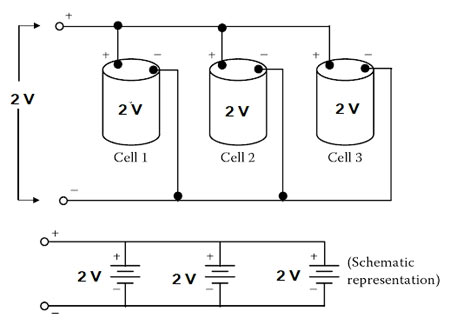 Ques.118. The two-wattmeter method is used to measure the input power of a three-phase induction motor. If the two-wattmeter reading is 1700 W and 1100 W, determine the power factor of the motor.

Since an induction motor always run on lagging power factor

Ques.119. For delta-connected load being measured the input power by the two wattmeter method, if Iph will lead Vph by angle φ then it is the case of ______

Ques.120. In a single-phase AC system, two wires are sufficient for transmitting voltage to the load. These are:-