Ques.131. The hall effect is associated with

In star connected system the phase voltage is

In star connected system the phase current is equal to the line current.

Ques.133. In a three-phase load, ____ difference impedance are connected together in a star or delta fashion.

The load can be connected in two ways, 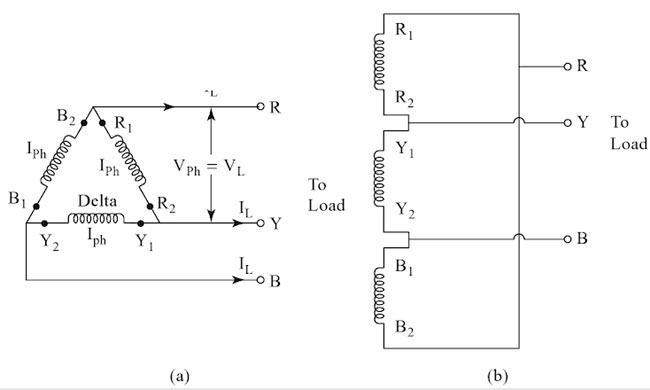 Ques.134. A device capable of detecting voltage, current, and the angle between the voltage and the current to provide power reading directly in watts is known as

Ques.135. When the two quantities are in the quadrature, the phase angle between them will be______

If the phase angle is equal to π they are in antiphase or phase opposition.

Ques.136. The two-wattmeters method is used for the measurement of power in a three-phase balanced system, supplied from a 415 V, three-phase, 50 Hz supply. If the reading on both wattmeters is 8.5 kW, calculate the total power consumed.

Ques.137. A three-phase star-connected balance load of (4 − j3) Ω per phase is connected across a three-phase 50 Hz, 400V AC supply. Determine current drawn from the supply.

In star connection, the line voltage is equal to the phase voltage

Ques.138. Alternating quantities of _____ frequencies can be represented in the same phasor diagram.

A quantity is called phasor if it satisfies the two criteria

Alternating quantities of same frequencies can be represented in the same phasor diagram.

A phasor is a complex number representing a sinusoidal function whose amplitude (A), angular frequency (ω), and initial phase (θ) are time-invariant.

In practice, when we solve any A.C circuit, more than one sinusoidal quantity is involved. All these quantities can be represented on the same diagram by phasors inclined at different angles to the reference phasor. If all the phasors have the same frequency, they will rotate with the same angular speed ω.

The phase will change with time, indicating that their magnitude changes with time but the phase difference between any two phasors will remain the same with time. The relation position of phasors (i.e. phasor difference) is important for ac calculations. The graphical representation of the phasors of sinusoidal quantities at the same frequency with proper phase relationships is called a phasor diagram.

Ques.139. A thermocouple is used for measurement of____

A thermocouple is a device for the measurement of temperature. Its operation is based on the findings of the Seebeck effect. According to the Seebeck effect, a small electric current will flow in a closed circuit composed of two dissimilar metallic conductors when their junctions are kept at different temperatures.

The electromotive force, emf, produced under these conditions is known as the  Seebeck effect. The pair of conductors or thermocouple elements, which constitutes the thermoelectric circuit is called a thermocouple.

Simply stated, a thermocouple is a device that converts thermal energy to electric energy. The amount of electric energy produced can be used to measure temperature.

Ques.140. The energy stored in a capacitor is given by___

The capacitance of a capacitor is defined as the measure of the charge stored by the capacitor per unit voltage; C = Q/V

Energy stored In the charged capacitor

When a capacitor is charged by a voltage source (say a battery) it stores the electric energy.  If C = capacitance of the capacitor; Q = charge on capacitor and V is the potential difference across capacitor then the energy stored in capacitor is given by