The band with the next higher average energy above the valence band is called the conduction band.

The energy-band theory also explains why some solids are electrical insulators (or just insulators), that is, substances that do not conduct electricity. In an insulator, there is a large bandgap between the valence and conduction bands. Very few electrons have enough energy to move across the large gap from a filled lower energy band to an empty higher energy band, so no current flows through an insulator when an external electric field is applied. 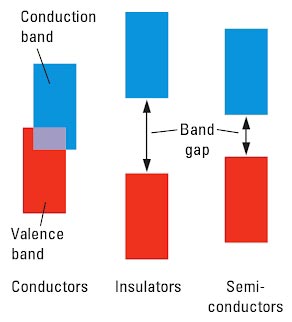 When the conduction band is close in energy to the valence band, the electrons can absorb a wide range of wavelengths in the visible region of the spectrum. As the excited electrons fall back to their lower energy states, they emit their extra energy as visit light, producing the luster characteristic of metals.

A sufficiently large electric field also can provide the energy needed for electrons to jump the bandgap. This property of semiconductors— switch from insulator to conductor with the application of an external electric field the basis for the operation of transistors, the cornerstone of modern electronics.

Ques.142. The capacitance of a capacitor is ______ the distance between the metal plates.

The capacitance of a parallel plate capacitor is given by,

Where ϵ is dielectric constant

A is the area of the cross-section of the plates

d is the distance between the plates

The capacitance is inversely proportional to distance.

The figure shows the structure of a parallel plate capacitor. It is made up of two parallel plates of the area of cross-section A, kept in an insulating medium and separated from each other by a distance of d meter. Then, if the two plates are applied with potential, one of the plates will be positively charged and the other negatively charged. Let the charge on the plates be given by Q coulombs.

Ques.143. Determine the current flowing through the 7-Ω and 3Ω resistors, respectively in the following circuit

current in the 3-Ω resistance

Ques.144. Which of the following statements is applicable for a three-phase AC circuit for a star connection?

In star-connected load the phase voltage between the neutral point and any one of the line connections is 1/√3 × VL of the line voltage.

Therefore the line voltage is √3 times the phase voltage.

In star connection, the line current is equal to the phase current.

Ques.147. Which of the following is NOT conductive material?

Germanium is a semiconductor material. If a small quantity of a pentavalent impurity (having 5-electrons in tt outermost orbit) like Arsenic (As), Antimony (Sb) or Phosphorus (P) is introduced in Germanium, it replaces the equal number of Germanium atoms without changing the physical state of the crystal.

Each of the four out of five valency electrons of impurity says of Arsenic enters into covalent bonds with Germanium, while the fifth valence electron is set free to moo from one atom to the other as shown in Fig. The impurity is called donor impurity as it donates an electron and the crystal is called an N-type semiconductor.

Ques.148. Which of the statements is correct for a permanent magnetic material?

Residual induction: Residual induction is the residual flux density remaining in a saturated magnetic material after the magnetizing force has been withdrawn. It represents the maximum flux output from the magnet that occurs at zero air gap.

Remanence: Remanence is defined as the magnetic induction that remains in a magnetic circuit after the withdrawal of an applied magnetizing force.

Coercive Force – The amount of reverse magnetic field which must be applied to a magnetic material to make the magnetic flux return to zero.

Properties of the material of a permanent magnet :

(1) It should have high retentivity so that it remains magnetized in the absence of the magnetizing field.

(2) It should have high saturation magnetization.

(3) It should have high coercivity so that it does not get demagnetized easily.

Hence, these materials cannot be easily magnetized and demagnetizer 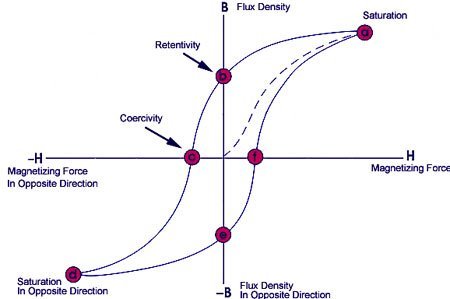 As steel and alnico have high coercivity, therefore, they are used for making permanent magnets. The metals in Alnico magnets are indicated by the pairs of letters making up the name, Aluminum, Nickel, and Cobalt.

The equation of alternating current is given as