Ques.81. After _____ number of the time constant, the transient portion reaches more than 99% of its final value.

For example, if the time constant of a circuit in 1 second (i.e. RC = 1 second), it means that time required for the capacitor voltage to rise 63.2% of its final steady-state value is 1 second. It may be noted that the capacitor is almost fully charged (99.3%) after the time equal to 5-time constants (i.e 5 RC).

At one TC, i.e. at one time constant, the transient term reaches 36.8 percent of its initial value. 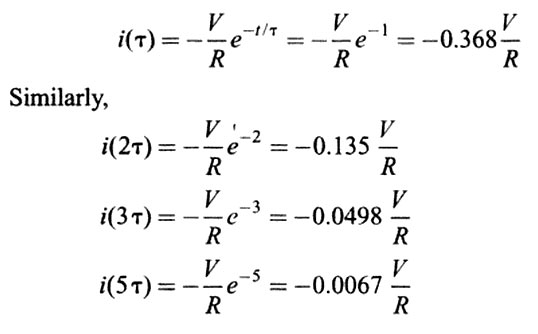 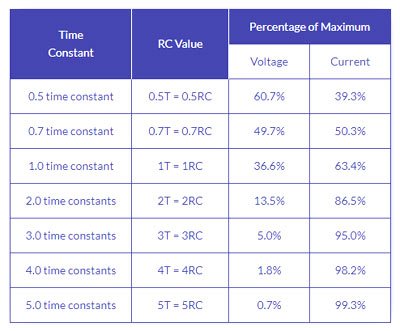 Ques.82. The two-wattmeter method is used to measure the total power in a balanced circuit powered by a 415 V, 50 Hz, three-phase, balanced power supply. If both readings are 4.5 kW but have opposite signs, the total power calculated will be.

In this condition, the two wattmeter reads equal and opposite

However, in wattmeter W1, the phase angle between voltage and current shall be more than 90° and hence the wattmeter gives a negative (i.e. downscale) reading.

Ques.83. The viscosity of the transformer oil is

Transformer oil is used in the oil-filled transformer and in some other systems such as high voltage capacitors, fluorescent lamp ballasts, circuit breaker etc.

Transformers generate a lot of heat by dropping high voltage to low voltage. The heat has to be removed or the copper will melt and electrical contact will be lost.

Transformer Oil has a very good heat transfer coefficient (removes heat easily), does not conduct electricity at all (so electrical shorts won’t occur), and is selected to have a high boiling point, so it remains a liquid inside the transformer. It is also very chemically stable, so there is no breakdown over time.

Viscosity is the measure of the resistance of a fluid to flow. A fluid that is highly viscous has a high resistance (like having more friction) and flows slower than a low–viscosity fluid. … Honey would move slower than water. Thus, water is “thin”, having a low viscosity, while honey is “thick” having a high viscosity.

Ques.84. Find the odd one from the following.

Substances like manganin, constantan, nichrome, tungsten, etc., offer high resistance to the flow of electric current through them. Hence, they have high resistance. Constantan (or eureka) is an alloy of copper (55%) and nickel (45%). It is used in the construction of pyrometers and thermocouples.

The brass has electrical conductivity much less than the pure metal. So brass is a conductor but not a good conductor.

Ques.85. A delta-connected balanced load is supplied from a three-phase balanced 400 V, 50 Hz AC supply. The readings on the two wattmeters are 970 W and 480 W respectively. Each phase of the load consists of resistance and inductance connected in series. Calculate the total active power consumed.

The power consumed by the three-phase delta connected circuit is

Ques.86. The line voltage VRY in a three-phase system is equal to:-

Let us again assume the emf in each phase to be positive when acting from the neutral point outwards, as shown in Fig.  The RMS values of the EMFs generated in the three phases are ERN, EYN and EBN. In practice, it is the voltage between two lines or between a line conductor and the neutral point that is measured. 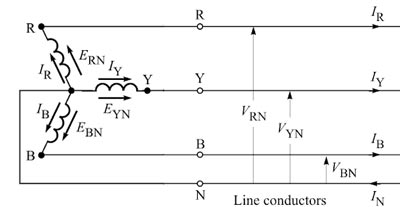 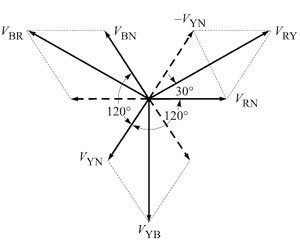 By applying Kirchhoff’s voltage law, we can get the magnitude and phase angle of the line voltage VRY (which is the voltage drop from R via N to Y. and can be represented by an unambiguous symbol VRNY):

Ques.87. The phase sequence is important in determining the direction of rotation of the ____

Phase Sequence: The sequence in which the voltages in three phases reach their maximum positive values is called phase-sequence. Generally, the phase sequence is R-Y-B.

The phase sequence is important in determining the direction of rotation of a.c. motors such as induction motor, synchronous motor, Single phase ac motor it also help in used to determine the parallel operation of alternators Connecting a generator with the wrong phase sequence will result in a short circuit as the system.

In an R-C circuit, when the switch S is closed, the response decays with time.

Discharging of a Capacitor

After one time constant, T has dropped by 63%of its initial value which is 1 – 0.63 = 0.37 or 37% of its initial value.   As the voltage across the plates is at its highest value maximum discharge current flows around the circuit at the beginning because the discharging rate is fastest at the start and then tapers off as the capacitor loses charge at a slower rate.

Hence when switch S is closed, the response decays with the time that is the response V/R decreases with increase in time as shown in Fig.  After 5 TC, the curve reaches 99 percent of its final value. 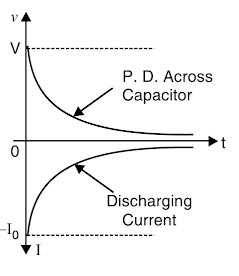 Lead in case of the lead-acid cell is known as Negative active material.

As the name implies, the lead-acid battery consists of a number of lead-acid cells immersed in a dilute solution of sulfuric acid. Each cell has two groups of lead plates; one set is the positive terminal and the other is the negative terminal.

Lead Anode
The lead anode is also known as the negative electrode in a lead-acid cell. Its active material is sponge lead, which increases the available surface area for reacting with the sulfuric acid electrolyte.

Lead Dioxide Cathode
The cathode is also known as the positive electrode in a lead-acid cell. The active material on the cathode is lead dioxide which is electroformed from lead oxide powder that must be pasted onto the grid.

Active materials within the battery (lead plates and sulfuric acid electrolyte) react chemically to produce a flow of direct current whenever current-consuming devices are connected to the battery terminal posts.

This current is produced by the chemical reaction between the active material of the plates (electrodes) and the electrolyte (sulfuric acid). This type of cell produces slightly more than 2 V.

Most automobile batteries contain six cells connected in series so the output voltage from the battery is slightly more than 12 V.

In addition to being rechargeable, the main advantage of the lead-acid storage battery over the dry cell battery is that the storage battery can supply current for a much longer time than the average dry cell.